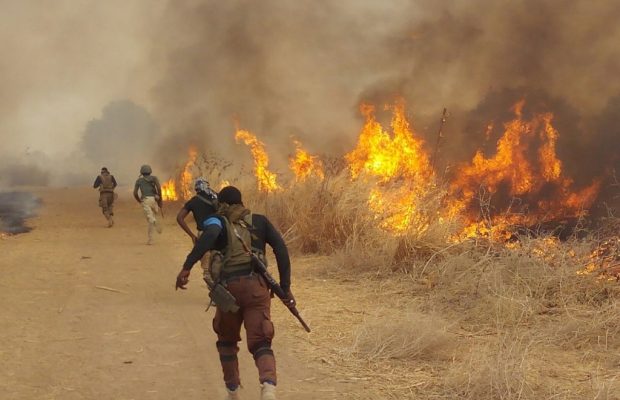 This was confirmed in a statement issued by the Coordinator of Defence Media Operations, Major General John Enenche on Sunday.

According to Enenche, the troops under Operation Accord swung on the bandits following reports of their activities around Ginde area of Saghev Council Ward in the affected local council.

Following the raid conducted by the soldiers, the bandits fled with gunshot injuries while some exhibits were recovered from them.

These items include one Galil rifle, one Galil magazine, quantity 13 X 7.5mm ammunition, one Motorcycle one woodland camouflage shirt, some quantities of Indian Hemp and assorted charms.

Subsequently, their camp was also destroyed.

Similarly, troops have arrested two suspects linked to the kidnap of a teacher in Foga LGA and area of the state.

The suspect – Yahuza Danlami and Danladi Baushe have been handed over to the Nigeria Police at Awe for investigations.

Recovered from them is a locally made rifle found in their possession.

Related Topics:recover weapons in Benue communityTroops kill bandit
Up Next