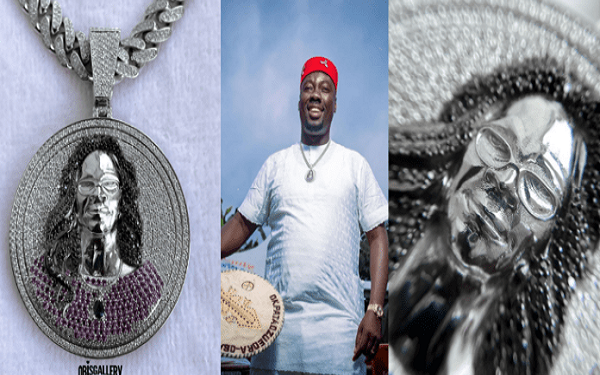 Entertainer and nightlife boss Obi Iyiegbu aka Obi Cubana has splashed whopping $100,000 on a diamond pendant and neckpiece in honour of his late mother, Ezinne Uche Iyiegbu.

Obi Cubana, who lost his mother in December 2020, is in Oba, Anambra State for the funeral ceremony with hundreds of friends, associates and well-wishers.

In a recent viral video, the socialite was seen being helped with a diamond neckpiece on by the jeweller.

The 46-year-old chairman of Cubana Group revealed he had to replicate his late mother’s face with gemstones, which is why he opted for a pendent and neckpiece made of pure diamonds.

He wrote: “Had to cut mama’s face on ice! @obisgallery came through.”

The jeweler said the socialite approached him to produce something extraordinary to immortalise his late mum while also affirming the diamond pendant and neckpiece worth.

He wrote: “@obi_cubana asked me “I want something special to commemorate my mum what can my 100k$ do for me” told him Say no more big bro #justaskobi.”