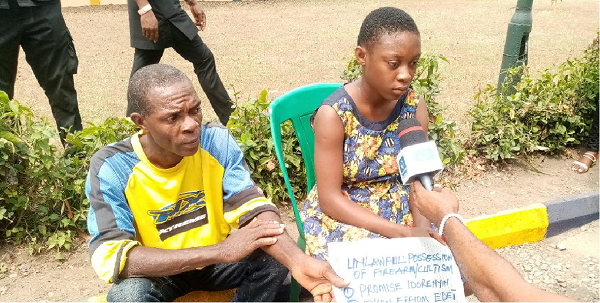 The 17-year old girl, who was arrested for being in possession of a pistol in Cross River State, yesterday, confessed that she is a member of a local cult group – Sky Queens.

Promise Idorenyin, an SS2 student of Community Secondary School, Ikot Ewa, in Akpabuyo Local Government Area of the state was paraded alongside her lover, who owns the locally-made double barrel pistol.

Okon Effiong, 38 and father of six children from two women, admitted that they were indeed lovers.

The farmer said the girl’s parents are already aware of their relationship.

Although initial reports suggested that Promise had gone to school with the gun for the purpose of shooting one of her teachers who had disciplined her for coming to school with a tinted hair, Effiong said yesterday that it was to be taken to a blacksmith.

He denied giving the gun to Promise.

Effiong claimed he planned to marry her, but the girl shook her head in disapproval.

He said: “Her parents know about us, and I have been helping the mother and the girl.”

There were some contradictions in their statements.

Promise, on the other hand, said the gun was for repairs but she did not know any blacksmith in the community.

Police Commissioner Sikiru Kayode Akande who paraded a total of 13 suspects before newsmen pledged the commitment and determination of the Police to combat crime in the state.

Akande noted that the police is deploying modern facilities and equipment across the state to achieve a target of three minutes response time to any security challenge reported at anywhere within the state.

Saturday Nation gathered that the state government plans to prosecute Effiong and re-orientate and re-habilitate Promise.

Related Topics:Cultist teenage schoolgirl arrested with pistol in Cross River
Up Next

How suspected kidnappers get victims on dating sites, dispossess them of money, belongings