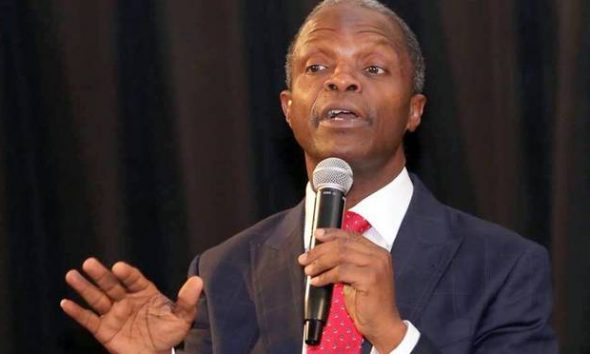 The federal government has predicted that Nigeria will be out of recession in the fourth quarter of 2020.

This will be possible if government sustains the economic performance that lifted the economy from -6.1 percent growth to -3.62 in the third quarter of 2020.

The Nation reported that Prof Osinbajo stated that Nigeria’s economic “decline was after 12 successive quarters of positive growth and came about as a result of the severity of the global downturn caused by the COVID-19 pandemic including lockdowns, disruption in global supply chains, business failures and rising unemployment”.

“During the lock-down, farming did not take place, businesses were closed, schools were closed as were hotels and restaurants. Also, airlines stopped flying while inter-state commerce was disrupted.

“The economy only began to recover when these activities resumed and if we are able to sustain the nearly three percentage point increase from the second quarter decline of -6.1%, the performance in the 4th quarter could take us into positive territory.”

To help it achieve this, the Federal Government has called on the private sector to partner with it in its bid to get the country out of recession.

According to the Vice President, to mitigate the impact of the recession brought on largely by COVID-19 the Federal Government introduced the Economic Sustainability Plan (ESP).

Government he said believes that a speedy pathway out of the current recession is through the quick implementation of the Economic Sustainability Plan (ESP). In addition with what we have done for MSMEs, the increased jobs and local production from agriculture, housing and solar installations will serve to further boost the economy. Indeed, when we deploy the 774,000 jobs (one thousand jobs in every Local Government) this will give further impetus to these efforts.

These programmes will further improve sectors that are performing well such as telecommunications and information services which grew by 17.3% in the 3rd quarter and the finance and insurance sector, agriculture, and construction. Of course, an improvement in global economic conditions including the restoration of global supply chains and resumption of exports and remittances should enable a V-shaped recovery.

“All the programmes in the ESP are reliant on the private sector playing a key role in creating and conserving jobs and the production and delivery of services in agriculture, housing, solar power, and digital technologies to mention just a few of the sectors,” he said.

In the case of agriculture, Vice President Yemi Osinbajo noted that “with the support of the banking sector, the Federal Government is working to organise finance for farmers and we are also guaranteeing uptake of produce. On its part, the private sector is responsible for the desired local production, provision of services and associated logistics across the agricultural value chain.”

The government he added expects larger companies and firms operating in all sectors of the economy to “build on this spirit of partnership by supporting small businesses especially by including them in value chains as suppliers, distributors, contract manufacturers, and service providers amongst other things.”

He also disclosed that, the Federal Government has provided COVID-19 payroll support to over 16,000 businesses with 101,000 of their employees getting between N30, 000 to N50, 000 over a three month period in the initial phase.

Up to 500,000 employees will be covered in this way in addition to the support being extended to artisans and road transport workers.

Reacting to the reduction on duty to be paid on imported vehicles, the Vice President said the decision was taken to check inflation brought on by high cost of transportation.

“With subsidy removal and the increase in fuel price and the pass through to food prices, transportation costs had to be reduced.”

The automotive policy the Vice President explained “is directed at localizing production of vehicles. So the logic was increase the duty and levies so that local production becomes more competitive.”

To those kicking against the duty reduction on vehicles, the Prof Yemi Osinbajo noted that “the annual demand for vehicles is about 720,000 vehicles per year. Actual Local production is 14,000 vehicles a year. So the problem is that at current rate of production we will not meet the serious national needs and this will just mean higher prices of vehicles and greater strain on other sectors of the economy that depend on transportation”.

He however assured auto manufacturers that government is “not giving up on the auto industry”.

According to him, “two important things to note: the first is that we still have relatively high duty 35% so there is still a disincentive for importation; second is that we are promoting policy that government must buy only locally manufactured cars.”

The Vice President appealed to the private sector to make “maximum use of the provisions of the ESP and the Finance Bill when it is passed by the National Assembly and also by retaining and creating jobs so as to keep people at work. In a similar spirit of partnership, private sector enterprises should also pay their due taxes.”

Related Topics:FG: Nigeria may exit recession in 4th Quarter
Up Next