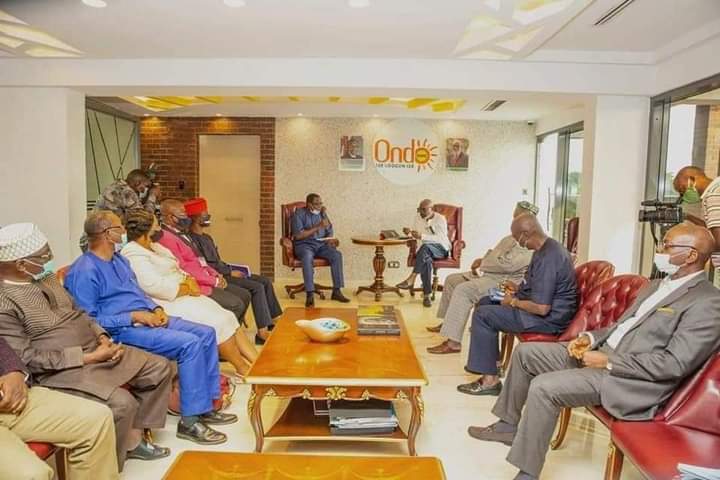 Ondo State Governor, Arakunrin Rotimi Akeredolu, has assured that his administration will continue to raise the banner of excellence at the Adekunle Ajasin University, Akungba -Akoko(AAUA) and sustain the already attained status of the institution as one of the best in the country.

Governor Akeredolu also reiterated the commitment of his administration to sustaining and developing the three state owned Universities in the state despite the financial challenges.

The Governor spoke while playing host to top management staff of AAUA at his office, Alagbaka Akure on Tuesday.

Arakunrin Akeredolu who disclosed that although the burden running three Universities is draining the resources,noted his administration will continue to do its best to keep the institutions going in line with the desire of the people of the state.

‘’Running three universities is not a child’s play. We are going through some trying times, particularly financial’’, he said.

Commenting on the accreditation exercise of courses in the University coming up this month, Governor Akeredolu said it was unfortunate that the exercise will be holding at the same period for the three state owned universities but was quick to add that Adekunle Ajasin University being the flagship of the institutions will not be abandoned.

‘’We are facing a lot of challenges but the accreditation cannot wait. It is not what we can postpone, we will do our best and see what we can do and make sure that we at least get something for the university to scale through this exercise’, the governor assured.

Earlier, the Acting Vice Chancellor, Professor Olugbenga Ige said the re-election of Arakunrin Oluwarotimi Akeredolu for another term of four years was consequent upon the sound leadership which the governor has brought to bear on the people of the state.

‘’Mr Governor sir, we want to rejoice with you as critical stakeholder in the educational sector of Ondo State. And to inform you that your re-election is a testimony of the impact which your leadership has effected in the lives of the people of Ondo State.