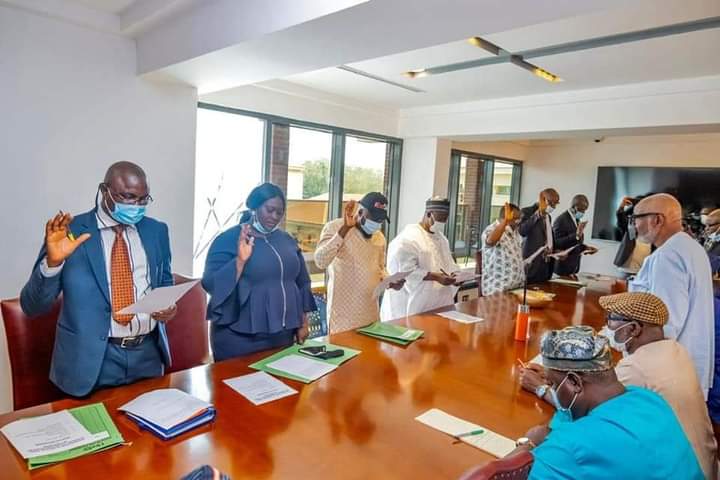 Ondo State Governor, Arakunrin Oluwarotimi Akeredolu, has inaugurated a Judicial Panel of Inquiry to look into the allegation of illegal activities of the officers of the Federal Special Anti-Robbery Squad (FSARS) in the state.

This was contained in a statement issued on Tuesday by the Special Assistant to the governor on New Media, Olabode Richard Olatunde.

Members of the Panel include; Rtd Judge, Ex-Police Commissioner, Activists, #EndSars Advocate and others.

Hon. Justice Salisu Adesola Sidiq (Rtd) Rtd. High Court Judge is the Chairman while Mr. Lanre Amuda is the Secretary of the Panel.

The Panel, according to the Governor, is expected to receive and investigate complaints of police brutality or related extra-judicial killings by the police in the State and also evaluate evidence and draw conclusions on validity of complains.

Governor Akeredolu stressed that the Panel is to also recommend compensation and other remedial measures, and carry out any other assignment that may be deemed necessary.

He advised the #Endsars campaigners on the street to be wary of the incursion of thugs and other elements who are bent on hijacking the protest to unleash violence on the people and cause unrest.

Governor Akeredolu warned that the people must be vigilant and resist all temptations to reduce serious issues of national importance to prebendal politics.

While stating that the Panel has six months to submit its report, Governor Akeredolu expressed hope that the findings of the panel will assist the State to find lasting solutions to the perennial crises of confidence between the Police and the citizenry.

He admonished parents, guardians and all responsible citizens to take charge and advise their children to desist from perpetrating acts which may deepen the precarious situation.

Governor Akeredolu said”The Government, under our leadership, will not permit any person or a group of persons to compound the already tense situation under any nebulous guise.“

“The membership of the panel reflects the determination of the Government to tackle the problem comprehensively. The careful selection of activists and security experts of proven integrity underscores the seriousness of the Government.

“We enjoin members who have useful information on the untoward activities of the disbanded security outfit SARS in particular and other security apparatus to avail themselves of this opportunity and submit memoranda to the panel.

“We should also encourage anyone who has had unpleasant encounters with officers and men of the defunct unit to file complaints before the Panel.

Speaking on behalf of members of Panel, the chairman, Hon. Justice Salisu Adesola Sidiq (Rtd) assured that members of the Panel will do more than their ability.

He said the constitution of the panel was a clarion call to serve and ensure that the society is better, saying the Panel will discharge its duty in fairness and commitment to ensure that peace is returned to the land.