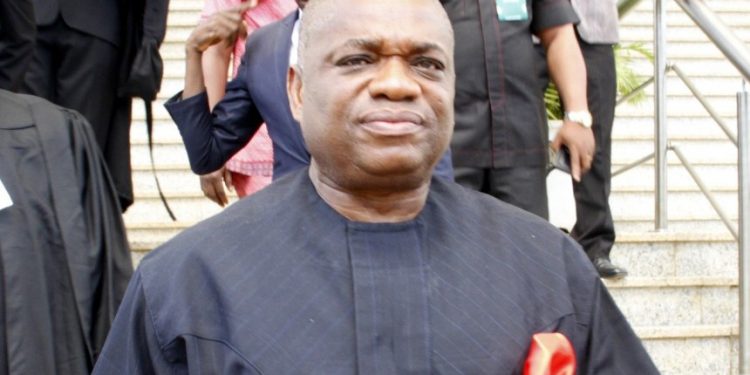 The order was sequel to the granting of an application filed by Kalu to secure his freedom following the judgment of Supreme Court which nullified his trial and conviction over alleged N7.1 billion fraud.

In his ruling, Justice Liman held that the application was meritorious and that he was bound by the judgment of the Supreme Court.

He consequently ordered the immediate release of Kalu from the Kuje Correctional Centre where he is currently being detained. Prior to the ruling, the court had heard arguments from parties in the matter.

In his arguments, Kalu’s lawyer, Prince Lateef Fagbemi (SAN), urged the court to grant his client’s prayers saying the application was a fall-out of the judgment delivered by the Supreme Court on May 8, 2020.

“This is an application brought under Section 159 of the Administration of Criminal Justice Act (ACJA) 2015. It was a fall-out of the Supreme Court’s judgement on the 8th of May, 2020. I adopt and rely on all the processes in urging my lord to grant the application,” he said.

Responding, EFCC’s lawyer, Rotimi Jacobs (SAN) said he is not opposed to the granting of the application. He, however, sought an accelerated retrial of the case as ordered by the Supreme Court.

“We are not opposing the application in principle. But, we are also urging the court to order that the ‘trial de novo’ order of the Supreme Court is complied with by all parties. We urge the court to give a new trial date,” Jacobs said.

In the motion on notice for Charge No FHC ABJ/CR 56/2007, Kalu is asking the court to set aside his trial over alleged N7.1 billion fraud and subsequent conviction by Justice Mohammed Idris (now of the Court of Appeal).

The former governor argued that there was no legal basis for his continued incarceration because the Supreme Court had on May 8, 2020, declared his trial a nullity and freed his co-defendant, Jones Udeogu.

In the motion, Kalu is praying for four reliefs. They are: “An order setting aside the judgement of this Honourable Court dated the 5th day of December, 2019, under the hand of Justice M.B. Idris, JCA the same having been given without jurisdiction:

“An order setting aside the sentence passed on each of the counts as applicable to the applicant in the 39-count charge in charge No: FHC ABJ/CR 56/2007 – the sentences having been imposed without jurisdiction.

“An order directing that the applicant be released forthwith, from the custody of the Nigerian Correctional Service Kuje Abuja FCT.”

The former governor also canvassed five grounds upon which the motion was brought.

They are that he and his co-defendants “were tried and convicted at the Federal High Court by Justice Idris who in the course of the trial was elevated to the Court of Appeal.

“The learned trial judge who conducted the trial has been held to have acted without jurisdiction in Suit No: SC.62C/2019 Udeh Jones Udeogu V Federal Republic of Nigeria, a Supreme Court decision dated the 8th day of May 2020

“The unassailable position of the law is that any judicial proceedings conducted without jurisdiction, no matter how well conducted, is a nullity

“The joint trial of the applicant with the second and third defendants/respondents having been pronounced a nullity by the Supreme Court entitles the applicant to a release from his custodial sentence.”

Related Topics:Kalu to leave correctional centre soon as court orders his freedom
Up Next