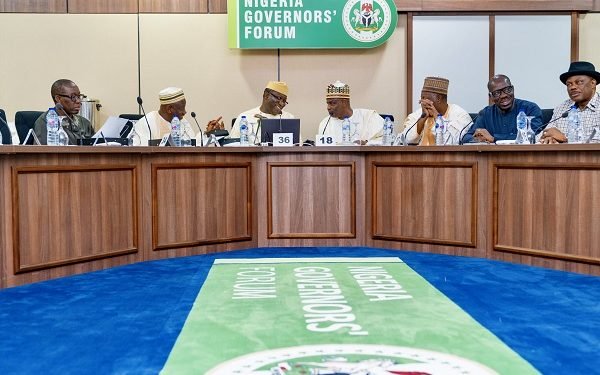 The Nigeria Governors’ Forum will on Wednesday, meet to discuss the issue of financial autonomy for the states’ judiciary and legislature, code-named the Executive Order 10, 2020.

A statement issued by Mr Abdulrazaque Bello-Barkindo, Head, Media and Public Affairs, NGF, on Tuesday in Abuja indicated that the consultation would be the 9th in the series of teleconference meeting held by the governors since the lockdown, occasioned by the outbreak of COVID-19.

President Muhammadu Buhari, on Friday, signed into law, an Executive Order, granting financial autonomy to the legislative and the judicial arms  across the 36 states of the country.

The order also mandated the Accountant-General of the Federation to deduct from source, amount due to state legislatures and judiciaries from the monthly allocation to each state for states that refuse to grant such autonomy.

According to Bello-Barkindo, the meeting, which will take place at 2 pm, will have in attendance, all the 36 states governors, via Microsoft Team from their various states.

“Among the issues to be reviewed are a number of critical national questions that revolve around the financial autonomy for the states’ judiciary and legislature code-named the Executive Order 10, 2020.

“Also to be discussed is the restructuring of states’ loans and the Federation Account Allocation Committee (FAAC) deductions,which have been a recurring decimal on the governors’ table.

“As usual the governors will be given an update on the COVID-19 pandemic in the country, as well as review a letter from the National Coordinator of the Presidential Task Force on COVID-19 as it relates to the pandemic draft regulations,” he said.

Bello-Barkindo added that there would also be a general update on efforts of the Coalition Against COVID-19,.(NAN)