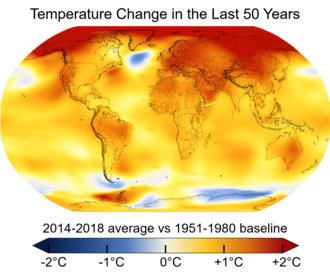 The years, the average global temperature has increased at the fastest rate in recorded history and experts see the trend is accelerating- all but one of the hottest years in NASA’s 134 year record have occurred since 2000. This is due to a phenomenon called GLOBAL WARMING. Global warming according to Wikipedia “is the long term increase in the average temperature of the Earth’s climate system”. It is a major aspect of change in the climate and has increased the temperature.

As a phenomenon which must have a cause, it is caused when carbon dioxide (CO2) and other air pollutants and green house gases come together in the atmosphere and absorb sunlight and solar radiation that have bounced off the Earth’s surface. Normally, this radiation would escape into the space but these pollutants trap the heat and cause planet to get hotter. Recently, the Amazon forest which produces 20% of the planet’s oxygen started burning continuously for weeks. The effects of this burning accumulates to the existing heat which will drastically reduce the amount of oxygen in the atmosphere unless some drastic measures are taken and that leads us to the effects of global warming.

Effects of global warming on life is enormous but a few of them will be mentioned here and they include rising sea levels, extension of deserts, more frequent extreme weather events such as heat waves. Also our food and water is affected by this plague threatening to wipe us out. Yes, our food and water which is our main basis of existence. This is because crop production will be negatively affected in low- latitude countries and now that our oceans are getting warmer. This is sure to affect the water lives and our own water consumption. Now, if our main sources of survival are affected, what else do we stand to gain if we do not combat global warming. Also, our health will be affected as heat which is caused by global warming will cause some reactions leading to new diseases. If this should continue, then we would, in no time lose our planet as certain conditions will arise which will for sure destroy lives such as the increasing heat waves which kills thousands per year and the loss of about 134 million metric tonnes of ice per year since 2002 in Antarctica. This rate could speed up if we keep on burning fossil fuels at this current pace which some experts say will cause sea levels to rise several meters over the next 50 to 150 years.

To combat this existence threatening phenomenon, we need to pant many trees as possible to increase availability of oxygen in the atmosphere and also reduce our dependence on fossil fuels. If these and other measures can be followed, our Earth will be free and return to the life keeping planet it was created to be.

Ndume and his crocodile tears on Boko Haram