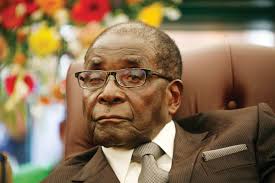 A political Don, Prof. Ayo Olukotun, describes the death of former President Robert Mugabe of Zimbabwe as a tragedy of a revolutionary African leader, who became an oppressor.

It was gathered that Mugabe died at the age of 95, as announced by the current President of Zimbabwe, Emmerson Mnangagwa.

According to him, Mugabe did not know when to quit office and, therefore, allowed the good that he had done be counterbalanced by the evil and ugly drama of staying too long in office.

“He came to power as an anti-colonialist and leader of a revolutionary party.

“Nigeria even assisted his party in those times.

“For a few decades, he did well and there were hopes of a new beginning for Zimbabwe.

“However, the tragedy of his later years was that of a population repressed, famished and put under iron rule.

“He even tried to make his leadership a family affair by attempting to hand over to his wife.

“That is the case of a leader who started well, but ended in an unfortunately bad way,’’ the scholar said.

Olukotun added that history would continue to remember the good things Mugabe did in Africa in his early years.

He added that a leader must never allow himself to have a bad phase while in power.

“A leader cannot afford to live through a generation that doesn’t know him for good and remarkable works.

“Now, we have a demographic shift in which majority of Africans are younger people.

“Most of them don’t know the revolutionary, freedom fighter and nationalist Mugabe.

“All they know is the Mugabe that oppressed his people, chased opponents and tampered with election results.

“You can’t blame them if they come up with bad comments that condemn him without considering the backdrop of a better Mugabe in the early years.’’

Mugabe was reported to have ruled the southern African nation for nearly four decades since independence from Britain in 1980 and was forced to resign in November 2017 after an army coup.

He was feted as an African liberation hero and champion of racial reconciliation when he first came to power in a nation divided by nearly a century of white colonial rule.