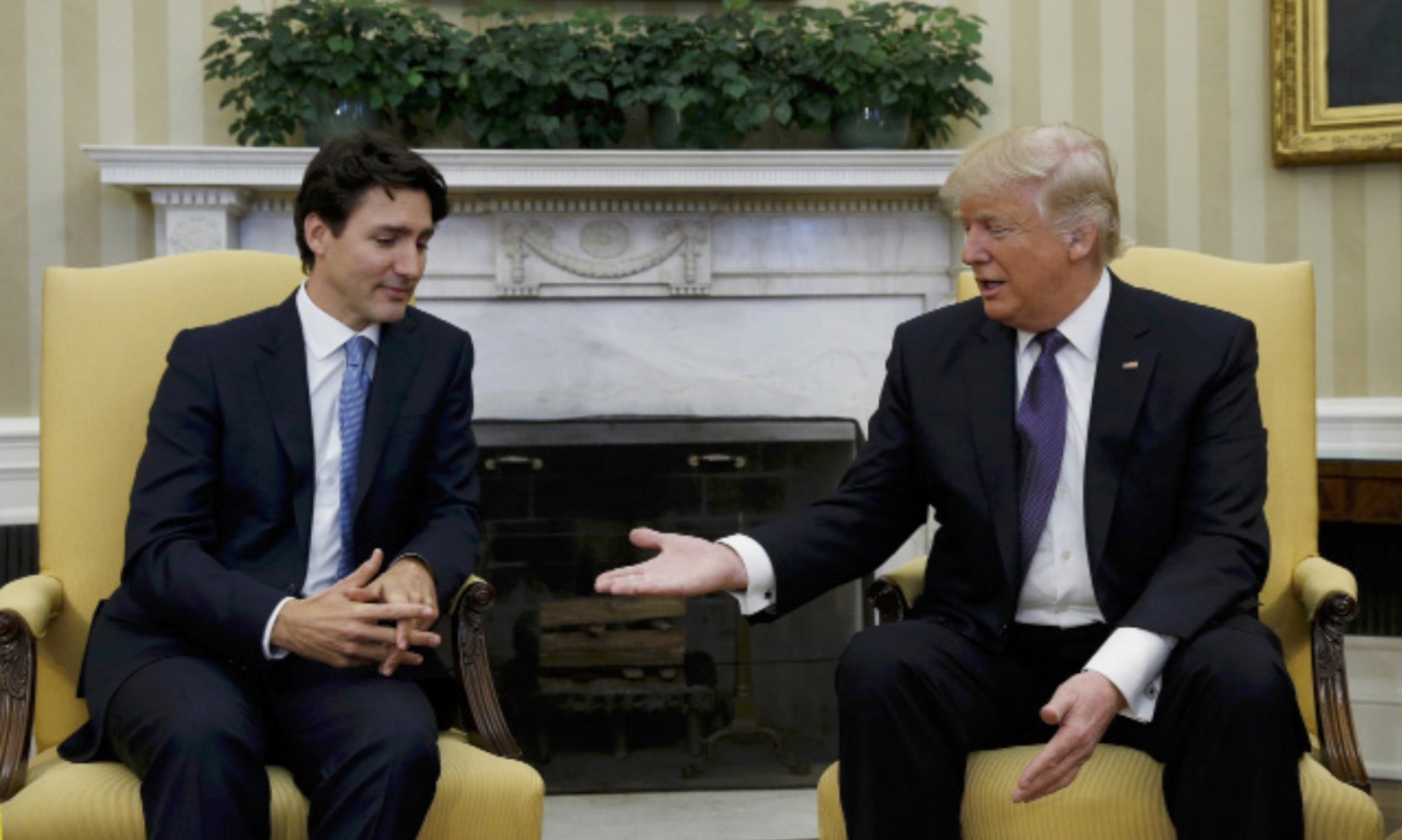 The Canadian Prime Minister, Justin Trudeau’s meeting with Donald Trump in Washington, yesterday, was seen as a deal-making session that could turn on an exchange of favours on North American trade and the plight of two imprisoned Canadians in China.

The transactional diplomacy could provide the prime minister with the elusive common ground he has constantly sought with the volatile American president.

Trudeau’s one-day whirlwind visit to the US capital might also repair the two leaders’ personal relationship, which fractured when Trump insulted Trudeau on Twitter, a little more than a year ago, after departing a G7 summit in Quebec.

Trudeau’s Oval Office meeting, yesterday, is ostensibly about providing momentum to efforts in both countries to ratify the new North American trade deal.

But Trump’s success is believed to hinge on persuading his Democratic opponents in the House of Representatives, the lower house of Congress, to allow the actual start of the ratification of the United States-Mexico-Canada Agreement (USMCA). Pundits believe that’s where Trudeau could prove handy to Trump.

Trudeau also met House of Representatives Speaker, Nancy Pelosi, Trump’s most powerful Democratic opponent, during his Thursday visit to Washington. In addition to Pelosi, he met the Republican leader in the upper chamber of Congress, Sen Mitch McConnell.

Trudeau is waiting for the trade deal to move through the US Congress before putting Canada’s ratification to a vote in the House of Commons. “We are going to make sure we are keeping in step with them, we have an ability to recall Parliament if we need to,” he said on Wednesday in Ottawa before leaving for Washington.

Analysts say that the sight of an enthusiastic Trudeau expressing support for the new deal alongside Trump in the Oval Office could serve as a persuasive example especially to House Democrats. As much as Pelosi would like to deny Trump a trade victory, she and her party have concerns about the deal’s substance as well. They want stronger provisions to enforce new labour standards in Mexico that would raise wages and give unions more power.

In return, Trudeau will be counting on something from Trump – vocal support for the plights of Michael Kovrig and Michael Spavor, the two Canadians detained in China for the past six months after Canada arrested a Chinese high-tech executive on an American extradition warrant. Their cases are widely viewed as retaliation for the arrest of Meng Wanzhou, who the US wants to stand trial for fraud for allegedly using US banks to circumvent sanctions on Iran.

The support Trudeau seeks likely includes Trump’s going to bat for the Canadians in his face-to-face meeting with China’s President, Xi Jinping, at next week’s G20 leaders’ summit in Japan. Vice-President Mike Pence pledged that Trump would do just that on his visit to Ottawa last month, but Trudeau is trying to find out whether the mercurial president currently plans to follow through.

“Trudeau has to remind the White House, remind President Trump, how Canada has been a solid supporter and player on USMCA. Canada is supporting the president’s initiative and in exchange, Canada could really use some support on the China issue,” said Laura Dawson, director of the Canada Institute of Washington’s Wilson Centre.

“It wouldn’t be completely out of character with what we know about the president. The president is a very transactional guy. Personal relationships, doing a favour for somebody, helping a buddy out is exactly in line with his modus operandi,” said Dawson.

Eric Miller, president of Rideau Potomac Strategy Group in Washington, said Trudeau needs to use the visit to gauge how much he can count on Trump.

“Where is the US as an ally to Canada when it comes to China? Is it: ‘Dude, you’re on your own’?”

On the trade front, Canada has been building strong support for the new NAFTA and open borders within the US and it has many American business allies who remain active.

The new Mexico-US-Canada Agreement, signed in November by the leaders of the three nations, is meant to replace the North American Free Trade Agreement. The pact needs approval from lawmakers in each country. Democrats in Washington now want stronger enforcement of labour standards and they oppose a provision that protects pharmaceutical companies from competition.

Trump almost derailed the agreement himself after threatening a five per cent tariff on all Mexican imports to pressure the country to do more to crack down on Central American migrants trying to cross into the US.

Canada reportedly took a first step towards ratifying a new North American trade agreement on Monday just three days ahead of US Vice President, Mike Pence’s trip to Ottawa to discuss passage of the treaty.

“We’re trying to cause enough conversations so they don’t come out against it prematurely and are open to hearing the economic arguments,” said Scotty Greenwood, the chief executive of the Washington-based group and a US diplomat in Ottawa when Bill Clinton was president.

“You see the Democrats keeping their powder dry, which is what we want.”

Trump’s trade czar, Robert Lighthizer, told the House of Representatives’ powerful ways and means committee on Wednesday that he’s willing to co-operate with Democrats to move forward on the new trade bill.

“The bill has been public and we have been in negotiations for nine months,” he said on his second appearance on Capitol Hill in as many days. He praised Pelosi for her efforts, as he did on Tuesday before the Senate finance committee, but he’s clearly in a hurry to ratify the new trade pact.

“Getting this done sooner rather than later is in everybody’s interest. It saves jobs, it helps the economy; it gets certainty in place.”