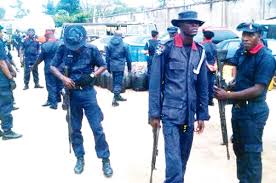 The Nigeria Security and Civil Defence Corps (NSCDC), Plateau Command, has warned the public to be wary of criminals whom were impersonating officers of the command.

Mr Tanimu Obasa, the command’s Public Relations Officer (PRO), gave the warning in an interview with Newsmen on Thursday in Jos.

Obasa said that one Pam Musa Pam, had been parading himself as a personnel of the command, and had been harassing and extorting money from innocent members of the public.

He said the impostor was operating with a fake NSCDC identity card, which carried a staff number 32024 ranking him as an inspector.

According to the PRO, Pam is not a personnel of the NSCDC.

He warned the public not to transact any business with the aforementioned person, adding that the men and officers of the NSCDC do not harass members of public or extort money from them.

He appealed that anyone with useful information about Pam’s whereabouts should alert the nearest security outfit. (NAN)

Suicide: FG To Establish Centre To Address Prevalence In Nigeria