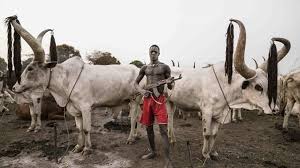 The caretaker chairman of the Local Government Rt. Hon. George Alli Rues Establishment Of RUGA Settlement in the area.

His position was sequel to a protest by the youths in Otukpo Local Government Area yesterday.

Reacting to the peaceful protest, the chairman reminded the federal government that the Benue State stance regarding cattle rearing which recognizes only ranching as the solitary form of cattle rearing in Benue State.

He reiterated that Otukpo as a Local Government in Benue state will not accept open grazing either in cattle colony form or in Ruga form as farming and grazing cannot be residents of a single apartment without evolution of crisis.

He also drew the attention of the federal government to the fact that there is a Land Use Act of 2008 which allocates powers and authorities over land issues to the states governments.

Alli, therefore, asserted that there is no legal backing of the move by the federal government to establish RUGA settlements in any part of Benue State without the approval of the Benue State Government.

He stated that the resultant effects of the move by the federal government will be null and void, of no consequences and nugatory when the action of the federal Government is challenged in court.

He reminded the Nigeria Government that in as much as the Benue State government is not against ranches for these herdsmen if they must rear their cattle in Benue, there is ‘Anti Open Grazing Prohibition and Ranches Establishment Law 2017’ in place guiding cattle rearing in Benue state.

RUGA Settlement: Northern Stakeholders, Govs, To Meet On The Matter