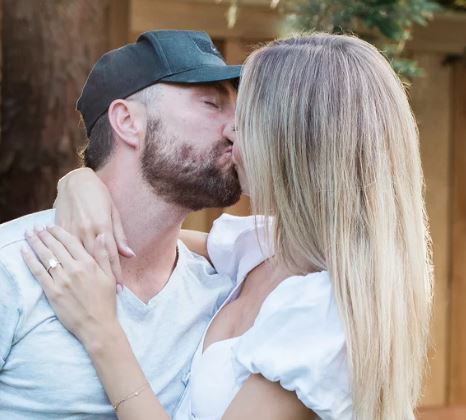 The country singer who earlier proposed to the Bachelor alum on Sunday in the backyard of her family’s Oregon home, had confirmed the two are engaged.

“So, I decided to keep it pretty casual. I asked her parents for different places in Portland I could potentially take her to, but after a lot of thought I decided doing it at the family cookout would be the most laid-back setting and that she’d appreciate the simplicity of me proposing to her in her parents’ backyard.”

“I was initially worried that doing it on Father’s Day might not be the best move, but her dad, Dave, said that it could only add to his Father’s Day and that’s when I decided Sunday, June 16 was the day,” he continues. “Shout out to Lauren’s parents, Dave and Kris, for having the yard in tip-top shape!

Stressing that  his plans for the weekend have been in the works for “a while now,” there was one hiccup.

“As I was about to propose… I stepped in fresh dog poop with my bare feet,” Lane emphasised with a laugh. “Not at all how I planned it out in my head!”

That aside, Lane went ahead with the proposal by playing a song he wrote for Bushnell titled, “Big, Big Plans.” Lane then made the lyrics — “Right now we’re back in her hometown / and I’m down on one knee” — a reality as he popped the question.

“Even though I felt pretty confident I was going to get the ‘yes,’ I’ve never been that nervous,” he says. “When I got to the third verse of the song and knew it was time, I pretty much blacked out. The next thing I knew, she said ‘yes’ and the nerves just lifted! It’s an explosion of excitement, pure joy, and love.”

Bushnell on her part says it all “hit” her when she heard the lyrics of the song for the first time and started processing what they meant.

“I lost it,” she told journalists. “It was the happiest moment of my life!”

“Chris is the most thoughtful person,” she adds. “He clearly put so much time and thought into not only the song, but also making sure everyone I love most was surrounding us in that moment. Holding each other, hearing the song for the first time and then seeing him get down on one knee is a moment I’ll never forget. Watching the video back was almost just as emotional as the proposal itself— I still get teary-eyed even thinking about it. Seeing all of those memories in one place and then reliving the best day of my life is pretty special!”

EndSARS: We have bad elements but not everybody – IGP