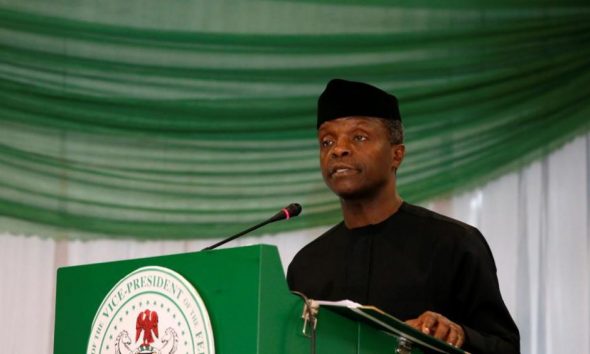 Vice President Prof Yemi Osinbajo on the occasion of this year’s Fathers’ Day celebration on Sunday had admonished men to love and honour women, reminding them that women are not subordinates to them.

According to Osinbajo, women are created equal to men.

The Vice President made the declaration while speaking to State House correspondents after celebrating this year’s Fathers’ Day at the Aso Villa Chapel, Abuja.

He was joined at the service by his mother, Mrs. Olubisi Osinbajo, Deputy President of the Senate, Ovie Omo-Agege, Secretary to the Government of the Federation, Mr. Boss Mustapha and others.

He said, “I think the responsibility of the father is incredible indeed and I think what is most important is to teach our men, young men growing up, that they must honour women, not just their wives.

“Of course, you must honour and love your wives, but I think that it is very important that we honour women.

“We don’t treat them as subordinate to us; they are created equal to men.

“But most importantly, we must honour them and recognize their role as partners, not just in families, but in society as well.”

“That’s what really makes you a father and I think the responsibilities of fatherhood are so many, whether one is a biological father or whether you are one who wants to take care of other children.

“I think that all of us, as men, have a role to play in the life of so many, not just our biological children but so many of them who have no fathers, even to some who have fathers to who we have responsibility to set example to lead exemplary life, to bring them up as scripture says in the way of the Lord.”

Also speaking, the Deputy President of the Senate, Ovie Omo-Agege, who earlier took the 1st Reading of the service taken from Malachi 1:3-6, said “it is not what we tell our children, but the lives we lead and they see us lead” that is important in the life of fathers.

He said this would help a lot in the formative years of children and makes them responsible members of society.

On his part, Secretary to the Government of the Federation, Mr. Boss Mustapha, said the Fathers’ Day was not about the celebration but a reminder of the role men have to play in their families as physical and spiritual head.

“It’s not about the celebration; I think it’s a constant reminder about our responsibilities as fathers.

“We are reminded of the fact that, first, we are the priests of our homes; so we ought to pray for our families.

“And when you have children that are aware that as a father, you are praying for them, the chances of their drifting will not be there because they know that the eyes of their father are constantly on them.

“Constantly, you are reminding God that he has entrusted you with this responsibility and you ought to live up to the responsibility.

“The second thing is that, as fathers, we are supposed to exemplify the life of Christ in the lives of our children because we are just like letters that our children read on a daily basis.

“It is not about how much we say, or what say; it is about our lifestyle.

“The other reminder is that we are bread winners in our families and we ought to provide for our families.”

Mr. Mustapha had earlier taken the 2nd Reading of the Service taken from Exodus 17:8-16

Delivering the sermon, the Chaplain of the Aso Villa Chapel, Reverend Seyi Malomo, advised fathers to be sensitive to discern any aggression that could harm their families.

Malomo also said fathers should lead their children in spiritual exercises like fasting and prayer, reminding them that their actions have direct implications for their children.

Prayers were said for President Muhammadu Buhari, Vice President Osinbajo, the legislature and the judiciary in Nigeria.

The congregation also prayed for unity, peace and progress of Nigeria.

Highlight of the service was the presentation of gifts to President Buhari, Vice President Osinbajo, President of the Senate, Speaker of the House of Representatives and others. (Daily Post)