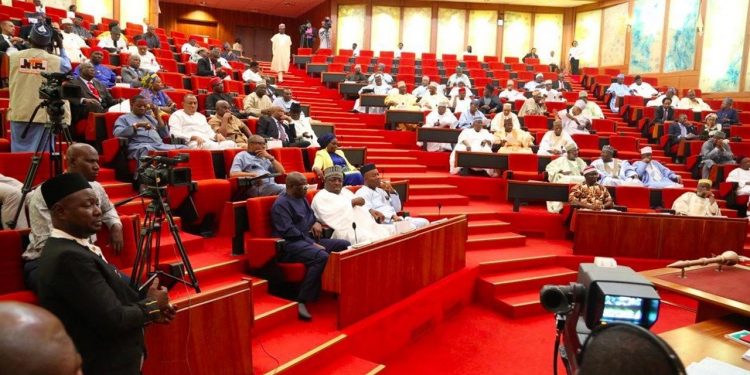 The ninth senate, at its first post-inauguration plenary, Thursday, shut down a motion raised by a Peoples Democratic Party (PDP) lawmaker, Istifanius Dung Giang, to debate the speech of President Muhammadu  Buhari, delivered on Wednesday, during the maiden edition of the celebration of June 12.

He had said: “On Tuesday, the president gave a speech during the celebration of June 12 Democracy Day. In the speech, he said so many things. I think we should look…”

He was still speaking when he was interrupted by the Senate President, Ahmad Lawan, who insisted that the issue must be approved by the Senate before it could be discussed.

When it was subjected to a voice vote, it was overwhelmingly rejected. Several attempt by the senator to revive the issue was ignored by Lawan.

The ninth Senate had its inaugural session following a proclamation issued by President Muhammadu Buhari. The session started at about 10.26 am with the new president, Lawan, presiding.

In the absence of a substantive majority leader of the Senate, its deputy president, Ovie Omo-Agege acted, pending when the leadership will be fully constituted.

Although there were few schisms at the commencement of the day’s business, the issues were brought under control in less than 10 minutes.

Meanwhile, the Senate has formally sent a message to President Buhari, Speaker of the House of Representatives, Femi Gbajabiamila, international parliamentary bodies and Secretary to Government of the Federation (SGF), Boss Mustapha, informing them that a quorum of the Senate had assembled and its presiding officers had been elected.

But the recognition of Mustapha was questioned by Lawrence Ewhrudjakpo from Bayelsa. He said since President Buhari was yet to appoint and swear in a substantive SGF, the message should be addressed to the office instead.

Again, Lawan rejected the suggestion arguing that the Senate must do everything within its powers to nurture a good working relationship with Executive arm.

Before adjourning for two weeks, Lawan constituted a 12-member committee to liaise with the management of the National Assembly on issues bordering on allocation of seats and offices to senators.  This was the outcome of a closed-door session which lasted for about an hour.

Lawan said the committee has two weeks to submit its report.

In a related development, House of Representatives has set up three Ad-hoc committees- Media, Welfare and Select- to facilitate the quick take-off of the ninth House.

Speaker Femi Gbajabiamila  announced this at yesterday’s plenary, shortly after the House emerged from a three-hour Executive  session.

The speaker at the commencement of plenary directed the Clerk of the House, Patrick Giwa, to notify the Presidency that the House at its inaugural session on June 11 elected its presiding officers and is now ready to receive communications from the president.

He also directed the Clerk to notify the Senate and the various security agencies that himself and Idris Wase has been elected as speaker and deputy speaker respectively.

Briefing journalists on the outcome of the Executive session, chairman of the Ad-hoc Committee on Media, Khadijah Bukar Abba Ibrahim said the House resolved that all WhatsApp platforms used by the various speakership candidates to galvanize support for their aspirations be shut immediately and a new one opened to accommodate every lawmaker.

Ibrahim stated that Reps, regardless of the political leaning, would  work together towards the progress and unity of the country.

The Ad-hoc Committee chair added that the traditional victory party, which is usually held in honour of the Speaker after every inauguration of the House have been shelved.

He noted that the Speaker has decided to embark on visits to some constituencies across the country to have a feel of situations at those constituencies.

Both legislative chambers adjourned till July 2. (The Sun)

EXCLUSIVE INTERVIEW: My Aspiration Is To Raise Hope For The Hopeless – Gad Peter Ameh