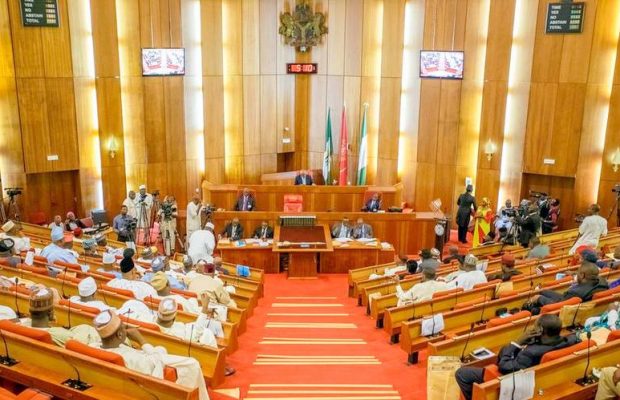 The Bade Emirate in Yobe on Friday described the withdrawal of Sen. Danjuma Goje from the Senate presidential race as statesmanly, patriotic and loyalty for APC supremacy.

Recalls that Sen.Ahmad Lawan who hails from Yobe.

The two prominent members, who spoke on behalf of the Emirate in Gashua, said that Goje’s decision was in national interest and the North-East in particular.

According to Gagiyo, “Sen. Goje has demonstrated high sense of patriotism and unity for the North-East and the ruling APC by stepping down his ambition and endorsing Sen. Lawan for the senate presidency.

“That APC has zoned the office to the North- East, it is expected that the distinguished senators would have a united front with a united candidate, especially the one endorsed by the party.

“Sen. Goje has no doubt shown maturity, statesmanship and brotherhood by placing the interest of the nation, the APC party and North-East over and above his personal interest” the Chieftain said.

He expressed hope that Sen. Ali Ndume, who had also indicated interest to contest the post, would borrow a leaf from Goje to withdraw and endorse Sen. Lawan.

Such action, they said would to further strengthen unity in the region.

Similarly, Alhaji Mamman called on the senators to consider competence and selfless ambition in the election of the principal officers.

“I want to say, without fear of contradiction, that Sen. Ahmad Lawan, remains most competent for the senate president.

‘’I wish to commend Sen. Goje for using his age, experience and patriotic sense of judgment to withdraw and endorse Sen. Lawan.

“I believe Sen. Ali Ndume will reconsider his ambition against the national, regional and party interests to also withdraw and endorse Sen. Lawan,” he said.

He expressed the hope that Nigerians who had the interest of the nation at heart would not want repeat of what happened in the 8th National Assembly “when selfish political interests fought our collective interests.”