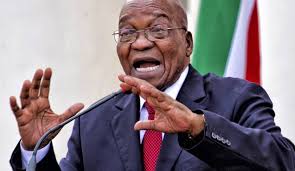 Jacob Zuma resigns as President of South Africa, heeding orders by the governing African National Congress (ANC) to bring an end to his nine scandal-plagued years in power.

Jacob Zuma resigned as President of South Africa on Wednesday, heeding orders by the governing African National Congress (ANC) to bring an end to his nine scandal-plagued years in power.

In a 30-minute farewell address to the nation, 75-year-old Zuma nonetheless said he disagreed with the way the ANC had shoved him towards an early exit after the election of Cyril Ramaphosa as party president in December.

Zuma, besieged by sleaze and graft scandals throughout his nine tumultuous years in power, said it was “unfair” the African National Congress had told him to resign, mainly because his comrades had not followed proper party procedure.

To South Africans who have suffered economic stagnation and national embarrassment under Zuma, it was yet more evidence of a leader unable to look beyond the byzantine inner workings of Africa’s oldest liberation movement to consider the greater good of Nelson Mandela’s ‘Rainbow Nation’.

Zuma, a 75-year-old anti-apartheid veteran and Zulu polygamist, has been South Africa’s most controversial leader since the end of white minority rule in 1994.

It was Zuma’s mastery of the ANC’s internal dynamics that enabled him to survive for so long, but his political influence had been on the wane since Deputy President Cyril Ramaphosa replaced him as ruling party leader in December.

As recently as August, after loyal lawmakers helped him defeat a no-confidence vote brought by the opposition, he cracked jokes and broke into song with a cheering crowd outside the South African parliament.

Six months later, he was forced to resign after the ANC’s parliamentary caucus told him it would help the opposition sack him on Thursday via yet another no-confidence vote.

“It’s us who got South Africa into this mess by electing Zuma to be president,” Jackson Mthembu, ANC chief whip has said. “We should have looked closely into the man. With hindsight we made a terrible error of judgment.”

Zuma was acquitted of raping a family friend in 2006 and is still fighting nearly 800 counts of corruption over a government arms deal from the late 1990s when he was deputy president.

He was found to have violated the constitution for failing to repay public money used to renovate his homestead but has so far escaped with giving a half-apology. He eventually paid back more than $500,000.

Zuma has come under fire over his ties to the Gupta family, whose members include three businessmen accused of using their friendship with him to amass wealth and influence government policy. The Guptas and Zuma deny any wrongdoing.

In 2012, Zuma also angered many for scolding “clever blacks” in a speech.