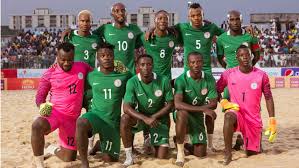 The United States of America (USA) Embassy in Nigeria has denied the visa applications of seven out of twelve players selected to represent Nigeria at the Beach Soccer World Cup scheduled to hold in Bahamas.

All twelve players require visas approvals to be able to gain entry into the USA to represent Nigeria as one of the two African contingent qualified to participate in the Beach Soccer global fiesta.

Reacting to the denial of the visa applications of majority of the team, the Nigerian Football Federation (NFF) spokesman, Ademola Olajire said the football body will write a protest letter to FIFA, the organisers of the championship, as the team needs to be fully complete to be able to participate in the tournament.

“We are poised to protest the Visa denial. We will write to FIFA on the development,” he said.

It could be recalled that Nigeria’s Beach Soccer national team moved up 10 places last year to place 20th in the overall world ranking.