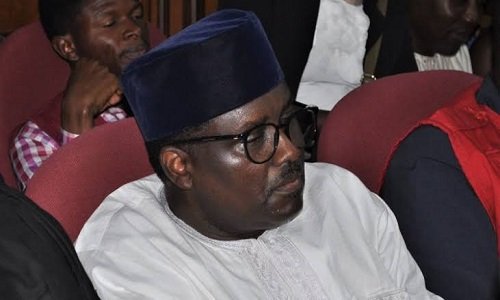 Recall that it was earlier reported that Justice Okon Abang, the presiding judge, fixed Oct. Oct 2 to deliver judgment in the trial.

However, after attending to a number of cases, Justice Abang reverted to Faisal’s matter.

He told the Economic and Financial Crimes Commission (EFCC)’s Lawyer, Mohammed Abubakar, and Faisal’s Counsel, A. A . Onoja, who were still in court, that he had realised that Oct. 2 falls on weekend (Saturday).

He then called for the case file and adjourned the matter until Oct. 4 for judgment.

NAN reports that Faisal, who is being prosecuted along his father, Maina, is standing a separate trial on a three-count charge bordering on money laundering.

However, Faisal jumped bail around September 2020 and stopped attending his trial.

The judge, on Nov. 25, 2020, summoned the lawmaker, Rep Sani Dan-Galadima, representing Kaura-Namoda Federal Constituency of Zamfara, who stood as surety for Faisal, for disregarding court order to produce the defendant in court after he was granted bail.

Abang then revoked the bail granted Faisal, ordered his arrest and directed that his trial should proceed in absentia having being said to have jumped bail by the prosecution.

The judge also ordered the surety to forfeit the property which he used as a bail bond to the Federal Government, having failed to produce Faisal.

When the case was called earlier, Abubakar told the court that the matter was slated for adoption of the final written address dated Dec. 10, 2020, and filed on Dec. 11, 2020.

However, Onoja, who appeared for Faisal, applied for a short adjournment on the grounds that he was not briefed on the development.

“I apply in the interest of justice for a short date to adopt our written address,” he said.

The anti-graft agency lawyer argued that on March 17 when the case was adjourned, Anayo Adibe, who appeared for Faisal, did not apply to file any written address, even after the ruling was delivered.

“Today is four months since that day and the defence has not done anything.

“I confirmed from Mr Onoja who announced appearance for the defendant and he informed me that he is representing Mr Adibe.

“I therefore urge my lord to refuse the application and allow us to adopt our written address,” he said.

Onoja then argued that it was on record that counsel to the defendant was not served hearing notice that the matter would be coming up.

But Abubakar disagreed, saying “This is not a reply on point of law. Counsel is raising a fresh issue.

“He had all the time to raise the issue when he was called upon to respond to our submission that the matter was coming up for adoption of final written address but he fail to do so.

“I urge the court to discountenance his submission as an afterthought.”

Onoja, who urged the court to grant his prayer, said the adoption of the written address was not part of the business of the court.

“The law is that the defendant should not be ambush or taken unaware,” he added.

Delivering the ruling, Justice Abang, who recalled that the court, on Nov. 24, 2019, ordered the matter to be heard in Faisal’s absence, also noted that Faisal’s right to open defence was later foreclosed and matter adjourned.

“The matter was later adjourned to May 18 for adoption of the final written address and for four months, the defendant did not file anything until now,” he held.

The judge, who dismissed the application for adjournment, said such request was made in bad faith.

“Therefore, the application for prosecution to adopt his written address deserves to succeed and is hereby granted,” he ruled.

The EFCC lawyer then adopted the written address as the commission’s argument in the matter and urged the court to convict Faisal in all the three counts leveled against him, “the prosecution having proved the case beyond all reasonable doubt.”

Justice Abang, therefore, adjourned the matter until Oct. 4 for judgment.

Related Topics:Court fixes Oct. 4 for judgment in Abdulrasheed Maina’s son’s trial
Up Next