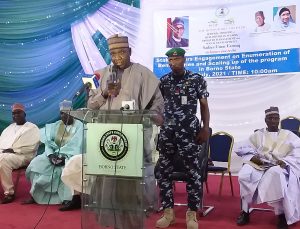 The Federal Government says it has enrolled more than nine million pupils into the National Home-Grown School Feeding programme (NHGSFP) in the country.

Hajiya Sadiya Umar-Farouq, Minister of Humanitarian Affairs, Disaster Management and Social Development, stated this at a stakeholders meeting for enumeration of beneficiaries and scaling up of the NHGSFP programme, on Wednesday in Maiduguri.

Umar-Farouq, represented by Alhaji Grema Ali, a Director in the ministry, said that nine million pupils have been benefitting from the programme in basic schools across the country.

She said the pupils were receiving one free nutritious meal a day during school term nationwide.

“The NHGSFP is a multi-faceted intervention to drive school enrollment, boost nutrition of the pupils, support local production of food as well as encourage employment and income generation.

“Specifically, it is aimed at the provision of one nutritious meal to all pupils in public primary schools in classes 1 to 3 to achieve these objectives.

“With over 100,000 cooks employed and 100,000 small holder farmers participating in this value chain, the NHGSFP is a serious potential for socio-economic development which needs to be strengthened, scaled up and sustained nationwide.

“The ministry now has the mandate to reach an additional five million pupils by 2023,” she said.

According to her, the stakeholders engagement in Borno is aimed at strengthening partnership and mutual recognition of the need to do more on the NHGSFP, to bring more Nigerians under the umbrella of the Federal  Government’s social protection mechanism.

She said the meeting would also look at scaling up the number of the pupils benefiting from the programme as directed by President Muhammadu Buhari.

The minister appreciated the existing synergy between the Borno State and Federal NHGSFP teams, stakeholders and implementing MDAs.

She said the agencies were working closely to verify the existing number of beneficiaries of the programme to update the records for effectiveness, transparency and accountability.

The governor, represented by his Chief of Staff, Prof. Isa Marte, said the NHGSFP and other social protection programmes such as N-SIP had contributed towards poverty reduction, restore hope  and build resilience in the people of the state.

In a remark, Hajiya Aisha Waziri,  the N-SIP Focal Person in the state, reitrated government committment to ensure successful implementation of the enumeration exercise in the state.

“We assure you that no child will be left behind, we will go to all the corners of the state for all children to be enroll into the programme,” she said.

Also speaking, the Consultant of the programme in the state, Alhaji Mohammed Alfa, said that pupils in 2,000 public schools would be enrolled through biometric data capture in the state.

Alfa said that there was special consideration for Borno to also include pupils of Tsangaya schools. (NAN)

Related Topics:School feeding program
Up Next