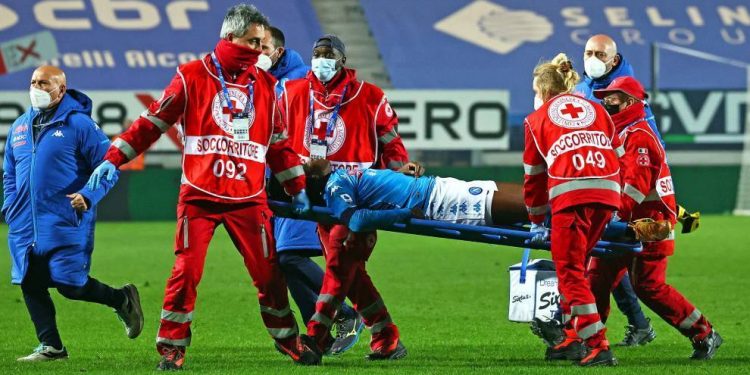 Napoli danger man, Victor Osimhen was rushed to the hospital following a collision with an opponent in their 4-2 loss to Atalanta last night.

The striker, who recently recovered from a shoulder injury and COVID-19, is believed to have suffered a serious injury.

Though, details of player’s health condition is still sketchy but medics attempted to stabilise him before he was stretchered off for game to resume.

The coaching staff led by Gennaro Gattuso and his teammates however were looking worried which is an indication of severe incident.

SportingSun last week reported that the Napoli’s record acquisition at €70 million marked a-100 day without scoring a goal for the Serie A side.

The forward’s last goal for Napoli, according to check, was his lone strike in their one nil win over Bologna on November 8, 2020.

With 40 points from 22 games, Napoli currently seventh on the log, trailing the league leaders Inter Milan by 13 points in the Serie A.