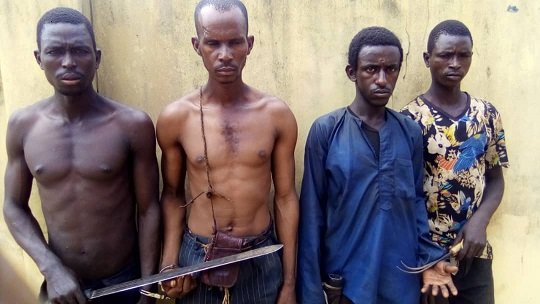 A six – member robbery gang has invaded the Christ Apostolic Church at Gudugbe Alagbon area of Wasimi in Ewekoro Local Government Area of Ogun State, beating worshippers to stupor before dispossessing them of their valuables.

The robbers, who struck during the vigil of the church, also abducted Mrs. Mojisola Atolagbe, a worshipper before escaping into the forest under the cover of darkness.

The Police Public Relations Officer for the state, Abimbola Oyeyemi, who confirmed this incident on Sunday, said the incident happened around 1:3Oam on Friday.

He whoever said five suspects have been arrested in connection with the pre-dawn attack.

Abimbola, a Deputy Superintendent of Police(DSP), told The Nation the abducted woman has also been rescued safely.

He said they were arrested after Obisesan Seye, the Shepherd – In – Charge of the church, put a distress call to the Police that his church was under attack by six men armed with dangerous weapons.

The spokesman explained that policemen attached to the Ewekoro Division stormed the scene, thoroughly combed the forest the robbers had ran into, smoked out five members of the gang and arrested them while the sixth suspect is being hunted.

According to Abimbola, the victims of the attack have identified the five suspects as their attackers.