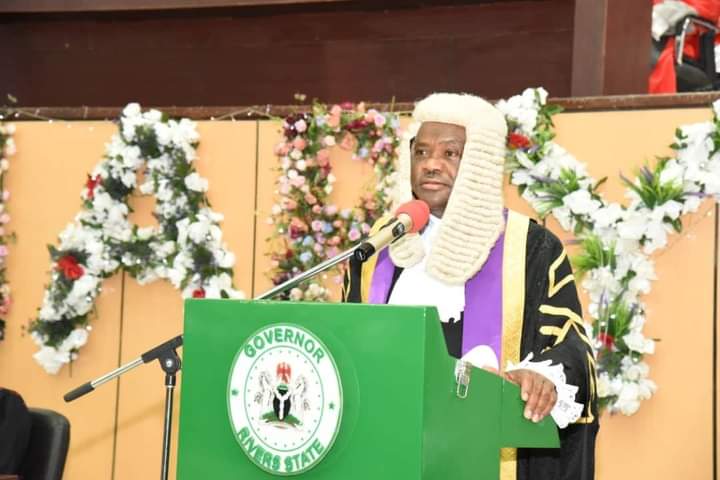 In a statement signed by Special Assistant (Media) to the Governor, Kelvin Ebiri, Wike said if the decision is implemented more problems would be created stating that it would hamper the independence of judiciary.

The Governor stated this during a special court session organised to mark the opening of 2020/2021 legal year of the Rivers state judiciary in Port Harcourt on Friday.

He argued that the action of the Federal Government constitute yet, another clear breach of the constitutional powers of the Governors to manage State resources in a federal system. According to him, the Federal Government cannot legitimately claim to be more interested in the progress of State judiciaries than the Governors of the respective States; particularly, Rivers State.

The governor stated that independence of the judiciary is not only about finances, but the ability of judicial officers to write judgments without the fear of being harassed by officers of the Department of State Services (DSS) or the Economic and Financial Crime Commission (EFCC).

Governor Wike, said while the issue of inadequate funding for the judiciary has been a recurrent challenge preventing the judiciary across the nation from enjoying practical autonomy and efficiency, the situation in Rivers State under his administration has been different.

The Governor, however, took a swipe at the chairman of Nigerian Bar Association Port Harcourt branch, Prince Nyekwere, for alleging that some persons were extrajudicially killed by the military, in the aftermath of Indigenous Peoples of Biafra (IPOB) killing of six soldiers, four policemen, and destruction of all police stations and Court buildings in Oyigbo.

He wondered why the NBA, that is yet to make a formal submission to the Judicial Commission of Inquiry set up by the State to probe the atrocities of the Special Anti-Robbery Squad (SARS), will without evidence allege extrajudicial killings in Oyigbo.

The Governor lauded the Chief Judge, Hon. Justice Adama Iyaye Lamikanra for her illustrious service and commitment to the progress of the judiciary in the State.

He stated that people had opposed her elevation as the Chief Judge based on her status as a non-indigene. But, noted that fortunately, she has vindicated the government’s decision to support her appointment.

“As the Chief Judge, you have been honest, effective and transformational. Under your leadership the judiciary developed effective cooperation with the executive and the legislative branches of government to secure, strengthen and advance the administration of justice.”

In her remarks, the Chief Judge, Justice Adama Iyaye Lamikanra, lauded Governor Wike, for providing the State judiciary the needed funds to ensure people have unhindered access to justice.

She condemned the destruction of all court buildings in Oyigbo by members of the outlawed IPOB, describing it as a set back for dispensation of justice.

The Attorney General and Commissioner for Justice, Professor Zacchaeus Adangor, said his ministry as an institutional stakeholder in the justice sector, will continue to cooperate and collaborate with the State judiciary and other stakeholders in driving the necessary reform and improving the administration of justice.

Earlier, there was a rededication church service that held at St. Paul’s Anglican Cathedral Church, Port Harcourt where the Rivers State Governor, Nyesom Ezenwo Wike took the first lesson, while the second lesson was taken by Chief Judge of the State, Justice Adama Iyaye -Lamikanra.

In his sermon, the Archbishop of Port Harcourt Methodist Church of Nigeria, Most Reverend Sunday Agwu admonished on the need for the judiciary to continue to uphold the truth, fairness and justice without compromise.

He noted that most judicial officers devote more time pursuing financial gratifications in order to deliver justice to favour the highest bidders to the detriment of the poor.

Archbishop Agwu reminded them to do self evaluation on this occasion of rededication service so that they can resolve to confidently check the excesses of the other arms of government and contribute their quota to building a virile society.

Related Topics:FG's decision to deduct state funds for judiciary is illegal - Wike
Up Next