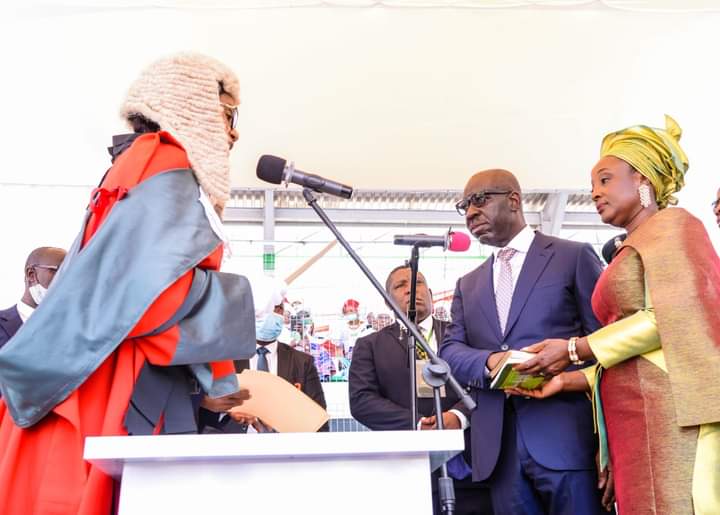 The Edo State Governor, Godwin Obaseki has credited his victory at the September governorship election to the power of God and determination of Edo people.

The governor made the assertion on Thursday in his inaugural speech in Benin City the state capital.

AFRIPOST reports that the governor and his deputy, Philip Shaibu were earlier in the day sworn-in for another four years.

In his speech during the inauguration, Obaseki promised commitment to deepening reforms and diversification of the state’s economy, “to consolidate on the progress recorded in our first term in office”.

His counterparts who honoured the occasion with their presence were Dr. Ifeanyi Okowa of Delta State; Duoye Diri of Bayelsa State and Alhaji Aminu Tambuwal of Sokoto State.

According to Obaseki: “Affirming that we are, indeed, kith and kin with a common destiny, I urge all Edo people to stop dwelling on the past. It is now time to take our collective destinies in our own hands and commence the arduous task of Making Edo Great Again.

“My administration will continue to provide value for their money (tax revenues) by utilizing it judiciously, transparently and with accountability, especially in view of existential challenges arising from the Covid-19 pandemic.

“I thank all our traditional leaders led by his Royal Majesty, Omo N’Oba N’Edo Uku Akpolokpolo, Oba Ewuare II, the Oba of Benin; our youths, civil servants, traders, women, professional bodies, artisans, among others, for their unalloyed commitment and loyalty.

Vatican offers free coronavirus tests to the poor in Rome