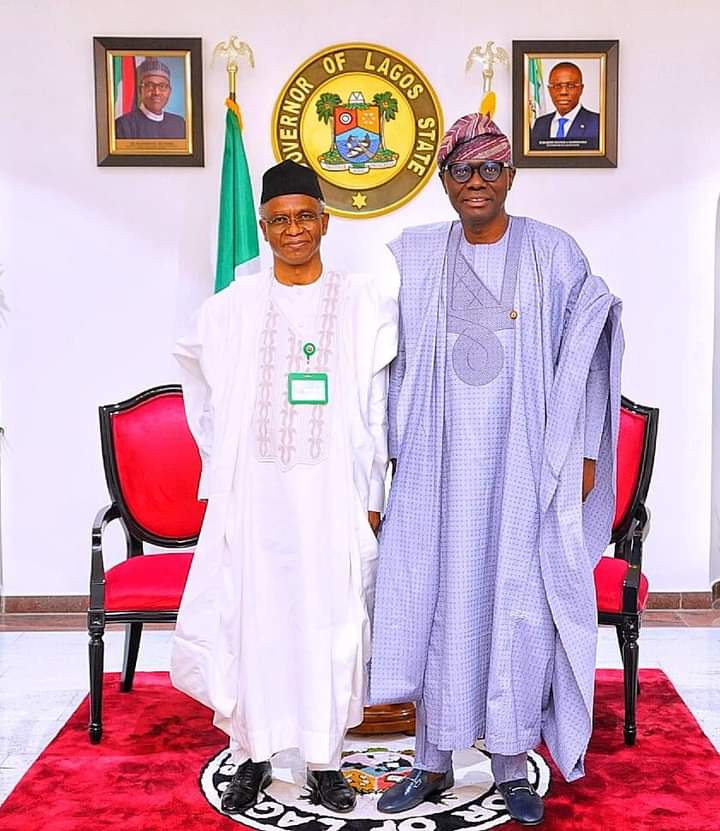 El-Rufai stated that those who thrive in violence, infiltrated the protest to achieve their agenda of wreaking a large-scale destruction on public assets and infrastructure in Lagos.

Governor El-Rufai shared the thoughts when he visited the State House in Marina to commiserate with his Lagos State counterpart over the coordinated arson sparked by the #EndSARS protest.

El-Rufai, who described the gravity of the destruction as “pure evil”, said he nearly shed tears as he flicked through the images of the torched Lagos assets. The Kaduna Governor said Lagos, which accounts for one-third of national GDP, did not deserve to suffer such pain.

He said the young people who carried out the violence intentionally engaged in an act of “self-destruction”, stressing that the repercussion of the action would be felt by them.

He said: “I have spent time to see some of the pictures of the destruction done on public properties in Lagos and I nearly shed tears. Anyone who cares about development and progress will cry after seeing what has been done to public facilities and people’s investment that provided jobs to youths.

“While expressing anger on police brutality may be right, but destroying public properties, which will have to be rebuilt using money that is needed to invest in other public infrastructure, under the guise of protest is nothing but self-destruction. The Government of Lagos and the Federal Government will have to re-invest scarce resources that could have been used for other things to rebuild the vandalised facilities.

“As a colleague, I can confirm that Governor of Lagos did all that could be done to ensure that this destruction does not take place. It is very sad to see what had happened in Lagos. I want to assure you that we will support you getting Lagos back on track. We will do whatever support Lagos needs from us to get back better.”

El-Rufai, who said the youth protest against the police was not out of order, said it was wrong for the protesters to call for disbandment of the entire police force because of the action of a few bad eggs.

He sympathised with the police and those who lost loved ones in Lagos in the wake of the violence, saying the Federal Government must not allow wanton destruction of public assets to happen again.

Sanwo-Olu said although Lagos had started to look forward and engage in new partnerships towards restoring the lost assets, he vowed to make the State uncomfortable for those with the intention to destroy the State’s economy and heritage.

Despite the ugly incident that trailed the protest, Sanwo-Olu said the State Government remained committed to getting justice for those who were brutalised by the disbanded Special Anti-Robbery Squad (SARS) team of the police.

The Lagos Governor thanked El-Rufai for the extension of support towards rebuilding the State, welcoming all forms of assistance that could be rendered to keep the flourishing for businesses.

Sanwo-Olu, who intimated his Kaduna counterpart of steps already taken to rebuild Lagos, said the State Government was doing it could to support those whose businesses were destroyed and create ambience for commercial activities to get back stronger.

Taxpayers expect high level of integrity from their leaders – Danbatta