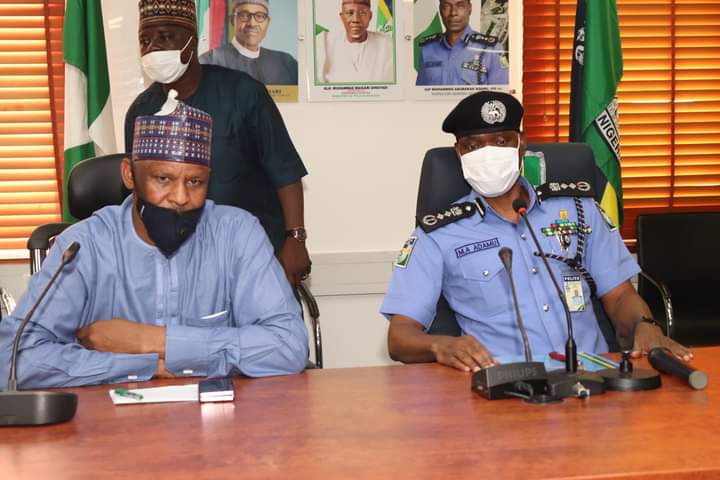 The Inspector-General of Police, IGP M.A Adamu, on Friday met with Honourable Members, House Committee on Police Affairs at the Force Headquarters, Abuja.

The development was contained in a statement signed by the Police Public Relations Officer for Headquarters, CP Frank Mba.

The Committee, led by the Chairman, Honourable Usman Bello Kumo, was at the Force Headquarters, as part of the oversight functions of the House of Representatives, to assess and proffer advice on the ongoing reforms of the Nigeria Police Force and efforts at restoring normalcy to areas affected by violence arising from the ENDSARS protests in some parts of the country.

The IGP, who noted that the Force has commenced Comprehensiv​e Internal Review and Evaluation of circumstances that led to the ENDSARS protests and the violence, fatalities and damage to critical infrastructure that emanated therefrom, apprised the Committee on efforts made so far by the Force to restore normalcy and prevent future occurrence.

Some of these efforts, the IGP reiterate include: strengthening the internal disciplinary mechanism of the Force, training of the newly formed Tactical Squad, debriefing and psychological/medical examination for operatives of the defunct Special Anti-Robbery Squad and general improvement of police-citizen relationship, etc.

The Committee expressed satisfaction at the efforts by the IGP in managing the ENDSARS protests and the ensuing violence but called for an all-inclusive approach at ensuring immediate end of the violence, improving police service delivery, rebuilding trust and public confidence and respect for human rights amongst others.

The members commiserated with the IGP over the loss of police personnel who died during the crisis and promised to work tirelessly with the Force to ensure an enabling environment for optimal performance by the police.

They called on other stakeholders including parents, guardians, online influencers, youth leaders, traditional leaders, religious leaders, etc to work with the police and government to bring a halt to the carnage on our streets and restore law and order.

The IGP reassured the committee as well as the Nigerian people that the Force is more than ever before, committed to Police Reforms and ensuring a safe and secure environment for all to live and thrive devoid of any violation of their fundamental human rights.