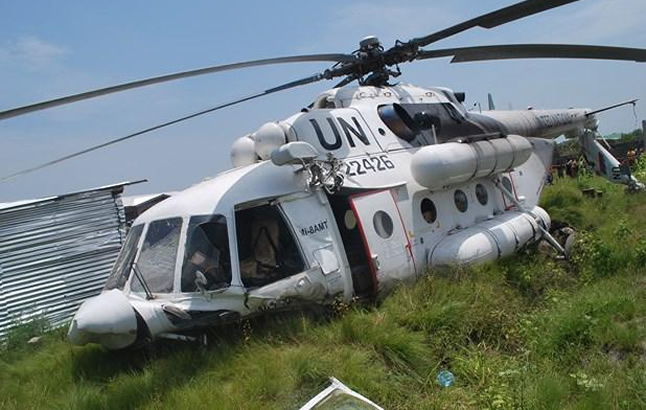 The terrorists on Saturday attacked Damasak area of Borno State, killing two civilians and shooting a humanitarian helicopter belonging to the United Nations mission, which was badly damaged.

The UN resident coordinator in Nigeria, Mr Edward Kallon, who confirmed the terrorists’ attack condemned the shooting of the chopper and called on the federal government to bring the perpetrators to justice.

Reacting to the incident, President Buhari in a statement by presidential spokesman, Mallam Garba Shehu described the attack as dastardly.

The release said, “This latest cowardly attack on the UN humanitarian helicopter is yet another desperate rear guard action by the Boko Haram terrorists who have been under intense pressure from the Nigerian military.

“Let me reassure the international community and Nigerians that this latest cowardly attack on a UN helicopter which claimed the lives of two people, including a 5-year-old baby, would not go without severe consequences.”

“Boko Haram terrorists are clearly on the back foot and their increasing attacks on innocent civilians, including UN humanitarian workers, was part of their desperation to prove that they are strong in order to cover up their dwindling fortunes.”

Noting that the security of foreigners and Nigerians remains a top priority of his administration, President Buhari said his government “shall leave no stone unturned until we eliminate these remorseless enemies of humanity.”

The president also underscored the need for all humanitarian and other aid workers in the region to, at all times, properly coordinate movements on air or land with the Theatre Commander and other military authorities. (Leadership)

Related Topics:Buhari vows decisive action against B’Haram over attack on UN Helicopter
Up Next