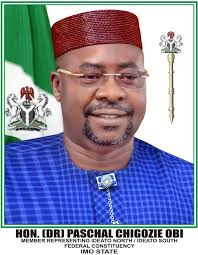 The member representing Ideato North/ South federal constituency, Hon Pascal Obi has said that Emeka Ihedioha of the All Progressive Congress APC who was sacked by the supreme court should wait till 2027 when governor Hope would have completed his Eight years tenure.

The Honorable who stated this during the celebration of the Supreme Court victory of Governor Hope Uzodinma by members of All progressives Congress in  Ideato North/ South Federal constituency held at Urualla, said that Governor Uzodinma will remain the governor of Imo state till 2027.

Meanwhile, the  former principal secretary to ex-Governor Rochas Okorocha has said that as a founding member of the All Progressives Congress in the state the party is one.

According to him, “I did not leave the party; what happened is that the national leadership of the party had decided to give a return ticket to the seating representative and I had to use the Action Alliance platform to actualise my political objective because the people of Ideato wanted me to represent them and as a result they voted for me.

“Today even as a first-timer, the leadership of the House appointed me committee chairman of all health institutions; that is an indication that they recognised my capacity.”

Related Topics:Imo: Ihedioha Should Wait Till 2027 – Imo Rep
Up Next

Bayelsa: I Am A Miracle Governor – Diri