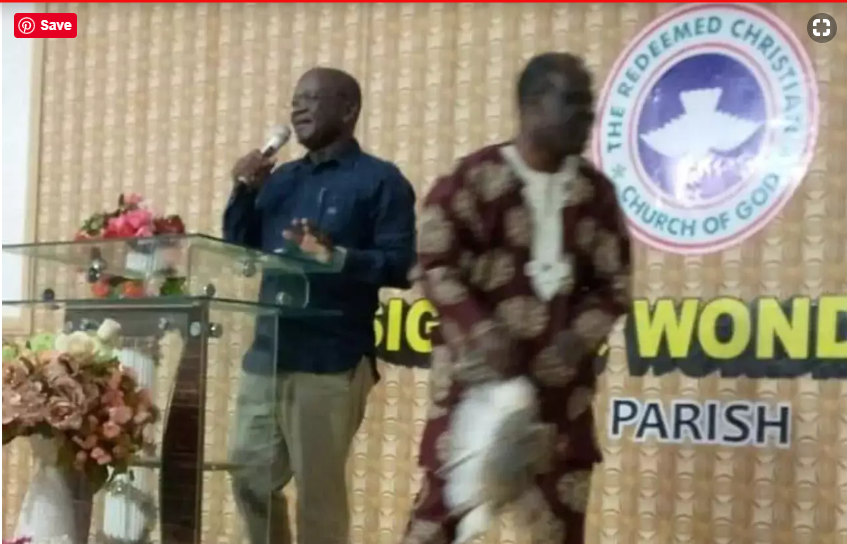 Governor Samuel Ortom of Benue State, was on Tuesday night attacked at the Redeemed Christian Church of God (RCCG), Makurdi, by a mysterious owl.

Ortom was in the church for a special thanksgiving service, shortly after the Supreme Court of Nigeria affirmed his election as Governor of Benue State.

According to an eyewitness, Prince Tordue Abe, the bird found its way into the Church, the exact time the Governor was giving his testimonies and went straight to the altar where Ortom was kneeling down for his testimonies.

But for the prompt efforts of some youths, the night bird, which is superstitiously believed to be a witchcraft bird, would have landed on the Governor’s head, DailyPost reports.

“It happened few minutes ago while the Governor was on his kneels praying at the Redeemed Christian Church Makurdi.

“An Owl flew in and headed right towards the direction of the Governor. On sighting the Governor the owl bowed before the Governor and together we rushed and killed it.

“Whatever it was they planned against the Governor, the Holy Spirit brought it to a halt.

“Indeed Governor Ortom is not just a man of God but a powerful man of God,” Abe said.

The apex court had on Tuesday delivered judgement in an appeal brought before it by Barr. Emmanuel Jime of the All Progressive Congress (APC), challenging the decision of the Court of Appeal to have upheld the election of Ortom, who contested under the Peoples’ Democratic Party (PDP) in the March 9, 2019 guber election in Benue.

In a 30-second judgement delivered by Justice Sylvester Ngwuata, the Supreme Court reaffirmed the victory of Governor Ortom, saying, “The judgement of the Tribunal and Court of Appeal need not to be disturbed”.