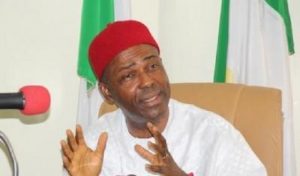 The Minister of Science and Technology, Dr. Ogbonnaya Onu.

The Minister of Science and Technology, Dr Ogbonnaya Onu, has said that the Federal Government would ensure equity in the distribution of projects.

A statement by Abdulganiyu Aminu, the ministry’s spokesman, said on Sunday in Abuja that the minister said this while inaugurating a flood and erosion control works project at Alex Ekwueme Federal University Teaching Hospital, Abakaliki.

“The Federal Government will be guided by justice, equity and fair play in the distribution of projects across the country.

“No part of the country will suffer neglect due to geographical location or political consideration under President Muhammadu Buhari’s administration,” it quoted Onu as saying.

According to him, danger to lives and properties associated with erosion and persistent flooding will be reduced by the project.

The minister said that the project was one of the 11 Federal Government’s ecological intervention projects for the third quarter of 2018.

He appealed to the university and benefiting communities to avoid indiscriminate dumping of refuse in drainage channels, and challenged them to own and maintain the project toward sustainability. NAN

Related Topics:Dr. Ogbonnaya OnuMinister of educationThe Minister of Science and Technology
Up Next