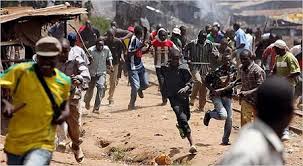 Kogi State is witnessing a rein of fear and anarchy at the moment. Sporadic gunshots could be heard ringing out from major towns in the state, forcing peace-loving citizens to continue to live in fear and angiush. There is terror in land, walking on all fours.

On Monday afternoon, political thugs were said to have gone on the rampage, killing a middle-aged PDP women leader who  was said to have been locked up in her house and burnt to ashes.

This was a sequel to  the announcement  by the Independent National Electoral Commission (INEC) that the candidate of All Progressives Congress (APC), Governor Yahaya Bello had been re-elected for the second term even as the thugs trooped out to celebrate the victory.

The  victim, Mrs Acheju Abuh, the Women Leader of Wada Aro Campaign Council, Ochadamu Ward, was said to have been burnt alive in her home by alleged jubilant supporters and thugs said to be celebrating their party’s victory.

Reacting to the banal act, the spokesman, Wada/Aro Campaign Council, Faruk Adejoh-Audu said: “Chanting GYB 4+4, the thugs, shooting sporadically, arrived Hon (Mrs) Abuh’s house at about 2pm this afternoon (yesterday) and surrounded the house, bolting every exit and escape from outside.

“They then poured petrol on the building and set it ablaze as other terrorized villagers watched from hiding. She reportedly attempted to escape through a window but was prevented by the metal burglary proof and gun shots with bullets raining in her direction.

“The blood-thirsty thugs waited, shooting and watching with relish while Mrs Abuh cried from inside the inferno until her voice died out.

“They reportedly left only when the entire house and Mrs Abuh had been burnt to ashes. There are fears that the killing spree may escalate over the night.

“We are calling on all men of good conscience to immediately help the people of Kogi State appeal to the Inspector General of Police to rein in Bello’s thugs and protect our people whose only crime was that they voted for their choice, a vote that was never allowed to count.

“Unless Nigerians of good conscience immediately come to our aid, innocent people may die worse agonizing deaths as the blood lust of Mr Bello and his supporters continue.

“So far there’s no indication that the Kogi State police will arrest her killers or even prevent further attacks and killings of people.”

Sources from Ochadamu said two other houses had been burnt by the thugs. When youths in the community made attempts to stop the rampaging thugs, a serious fight was said to have ensued which led to one of the thugs allegedly hurting himself with his charmed knife which led to severe bleeding.

He was rushed to a popular clinic in the community where health workers refused to attend to him without a police report.

The thugs died shortly after he was brought to the clinic while his enraged comrades promised to burn the clinic.

This, it was gathered has created fears for peace-loving citizens especially women and children who are often terrified with serious health problems created  for the aged and those suffering from hypertension.

Reacting to the ugly incident the spoke man of the governor, Kingsley Fanwo, expressed sadness over the incident and said those responsible for the crisis would be brought to book. Sunnewsonline.com