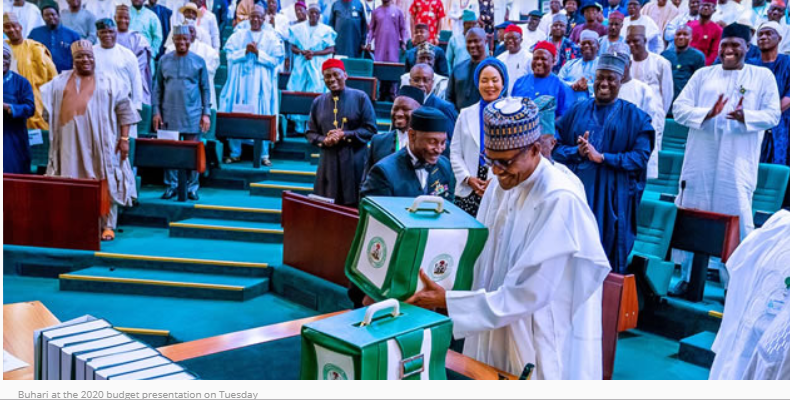 Ngelale made the statement in an interview with News Agency of Nigeria (NAN) in Abuja.

President Muhammadu Buhari on Oct. 8, presented the 2020 budget proposal of N10.33 trillion to lawmakers at the National Assembly.

Ngelale while speaking on budget implementation and performance, said measures had been put in place to ensure that the 2020 budget performance is better than previous ones.

“As we move into the 2020 budget cycle, Mr President and the legislature have agreed that we must do January to December so that we optimise budget performance.

“Because, we will have the calendar, we will have the resources, we are not going to have all the fights between the executive and the legislature to ensure that, that plays out and budget performance will be better next year.’’

He, however, said that the president was still committed to achieving his target for the 2019 budget.

“Ironically, in areas that the president should be receiving accolades he is receiving criticism.

This issue of whether or not the president will release money for constituency projects that some legislators wanted to prioritise, all of that led to the late assent to the 2019 budget.

“The major reason why that is the case is because there is just not enough information out there in the public space.

“I don’t think people understand the implication of having a budget that is signed into law half way into the year.

“If you received a budget and signed it into law around say late May early June, look at how many days are remaining in the year.

“And, what has happened is in about six months approximately or seven months, we’ve been able to release N300billion in capital expenditure on the 2019 Budget, but we are not done yet,” he said.

He recalled that Mr resident in his Oct.1 speech made it clear that by the end of the year, the administration would release N600 billion in capital expenditure, to fund the provisions of the 2019 budget separate from the 2020 budget.

Ngelale expressed optimism that about N900billion cash releases would be made by the end of the year.

On the position of the National Assembly to pass the 2020 budget before the end of the year, Ngelale said the current administration is determined to make life better for the ordinary citizens.

According to him, processes that will ensure the speedy passage of the budget by the end of the year are already in place.

“We’ve already seen series of processes unfolding that will ensure that it happens.

“Obviously, we saw earlier in October where the President made the submission of the budget, not just the budget, but attached to it the financial bill that has positive implications for the every Nigerian at the most vulnerable level of society.

“I think, ultimately, the quick passage of the Medium Term Expenditure Framework (MTEF) and the Fiscal Strategy Paper (FSP) made it very clear the intentions of the 9th National Assembly and indeed President Muhammadu Buhari’s administration, to nsure that this budget is passed into law before Jan. 1, 2020.’’

According to him, the difference between the 2020 budget and others that had come before it is the president’s determination to complete all ongoing projects.

He stressed the need to fully fund all ongoing projects to ensure that they reached completion before the administration’s exit in 2023.

The presidential aide added that completing such projects would benefit the citizenry. (NAN)