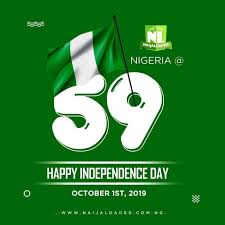 The federal government yesterday has celebrated Nigeria@ 59 as independence anniversary without the usual public witness at the presidential villa, Abuja.

President Muhammadu Buhari, Vice President Yemi Osinbajo whom both graced the occasion , inspected the quarter guards, and walked to the villa forecourt to receive the national salute which was followed by the rendition of the National Anthem.

The high point of the ceremony was the presidential change of guard from 177 Guard Battalion to 7th Battalion of the Guards Brigade, marking the occasion at the forecourt of the State House.

President Buhari, however, did not make a public speech during the ceremony which started at 10 am and lasted for almost two hours

The the anniversary celebration was the first in the second term of the administration of President Buhari.

Senate President, Senator Ahmad Lawan,  arrived  the venue at 9.46am, the Speaker of the House of Representatives, Hon. Femi Gbajabiamila, arrived at the venue at 9.44am.

Other dignitaries at the ceremony were the chief justice of Nigeria (CJN), Justice Ibrahim Tanko Mohammad, the secretary to the government of the federation (SGF), Boss Mustapha, the inspector- general of police (IGP), Mr. Mohammed Adamu, and the minister of the Federal Capital Territory (FCT), Muhammed Bello.

Others were the service chiefs and top government functionaries, and members of the diplomatic corps.

There was also a 21-gun salute as part of military tradition in the honour of President Buhari.

The ceremony witnessed the inspection of the new Guard/Quarter Guard, silent drills, colour party, posting of sentries and weapons and uniform inspections to ensure conformity with military standards.

Shortly after the event, President Buhari signed the anniversary register, released the pigeons from cage before he was joined by some dignitaries to cut the anniversary cake.

The low key celebration replaced the full military parade, drills and entertainments, which used to hold at the Eagle Square, Abuja.

President Buhari had earlier in the day addressed the citizens via a nationwide broadcast.