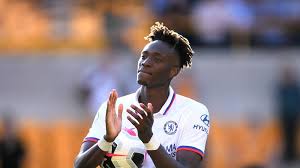 Chelsea striker, Tammy Abraham has said that he has not ruled out choosing Nigeria over England to represent on the international scene.

The former England youth international has already appeared for Three Lions twice in two friendlies against Brazil and Germany but has yet to make his competitive debut for the England.

As a result, he is still eligible to pick Nigeria, who he qualifies to play for through his father.

When he played against Germany back in 2017 it appeared he had chosen committed his future to England, but after not being included in the squad for nearly two years the striker admitted he has not ruled out the option of a switch.

Abraham has made a fantastic start to the season and has seven Premier League goals in five appearances so far during this campaign.

The 21-year-old grabbed a hat-trick in Chelsea’s 5-2 win over Wolves on Saturday and afterwards, the speculation over his international future resurfaced.

And speaking after the victory at Molineux, Abraham appeared to leave the door open when asked about the possibility of playing for Nigeria.

“I have heard the talks and I’ve not really been focused on that yet,” he said

“You can never say never, whatever comes first really.

“It is about focusing on Chelsea and hopefully scoring goals and getting victories.”

Abraham wasn’t included in Southgate’s squad for last week’s Euro 2020 qualifiers against Bulgaria and Kosovo and the England boss could now be under pressure to include the Blues academy graduate in the upcoming matches against the Czech Republic and Bulgaria in October.

And when previously asked about Abraham’s prospects, Southgate said: “Tammy is one of a number of players who have either started the season well or we know well from our junior teams. This squad can look different over the next months.”