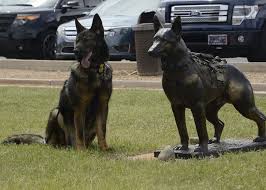 The Nigerian Air Force (NAF) has certified another batch of 20 Military Working Dogs (MWDs) and Canine (K-9) handlers trained in a range of special operation skills including rappelling from helicopters as well as tracking of adversary movements and positions in an area of operation.

The director of Public Relations and Information, Air Commodore Ibikunle Daramola, in a statement, said the graduation ceremony, which took place yesterday, at the NAF Base, Kaduna, would further improve measures for the protection of NAF assets and facilities as well as critical national infrastructure, like Airports, especially in times of emergencies.

In his address, the chief of air staff (CAS), Air Marshal Sadique Abubakar, noted that upon assumption of office, part of the outcome of a gap analysis conducted to ascertain the NAF’s requirement for the protection of its assets revealed the need for a holistic capacity development among the specialist directorates charged with security, law enforcement and base defence.

He stated that the Air Provost (AP), as one of these specialist directorates, has received and will continue to receive attention in this regard, with the development of K-9 capabilities being one of the areas of focus.

He recalled how the NAF had inducted the first batch of 20 MWDs with narcotics and explosive detection capabilities.

The CAS noted that the import of inducting Special Operations Dogs in the second batch of training was to provide the AP with capacity to conduct specialised policing functions in support of the roles of the newly established special operations command.

Air Marshal Abubakar highlighted some of the additional steps taken to enhance the capacity of the NAF AP personnel, including the establishment of a new K-9 Wing in Bauchi, equipped with modern facilities for K-9 development and administration, to support the Counter Insurgency (COIN) Operations in the Northeast.

He said a full-fledged AP Training Centre had also been established at Kerang, Plateau State, to increase the scope and depth of AP training in the NAF.

The CAS noted that another major feat recorded in the capacity building efforts of the AP specialty was the resuscitation of the Provost Forensic Laboratory in 2018, after it had been disused and abandoned for over 20 years.

He added that capacity had equally been developed in the area of Crime Scene Investigation (CSI), where 16 AP Personnel each had been trained in Stages 1 and 2 CSI Courses, as well as Train-the-Trainer and Forensic Awareness Courses.

The CAS expressed the expectation that the handlers, along with their dogs, having undergone intensive advanced K-9 training for 13 weeks (10 weeks of which were conducted overseas and three in-country), must endeavour to add value wherever they are deployed.

He emphasised that the service intends to increase its K-9 holding with the addition of 20 more special operations dogs that would enhance the potential to detect, track and provide early warning of adversary positions while also exploiting the psychological effects of dogs on adversaries.

“Thus, K-9 development is projected to be a force multiplier to the operational exploits of the NAF’s aircrew and ground personnel that would enhance the security of Nigeria and Nigerians”, he stated.

The air chief noted further that some of the dogs would soon be deployed alongside NAF Regiment Specialty to conduct training exercises on some troubled roads like the Kaduna-Abuja and Kaduna-Birnin Gwari Highways as well as locations in the Southwest of the Country.

Air Marshal Abubakar also expressed the appreciation and continued loyalty of the service to the commander-in-chief, President Muhammadu Buhari, for providing the enabling environment for the NAF to keep discharging its responsibilities despite other contending imperatives.

Earlier, in his opening remarks, the chief of administration (COA), Headquarters NAF, Air Vice Marshal Kingsley Lar, who was represented by the NAF Air Provost Marshal (APM), thanked the CAS for his vision and foresight in establishing the NAF K-9 Unit in February 2016.

He said these had significantly improved security and law enforcement in NAF bases as well as in various operational theatres.

The COA remarked that the tactical and special operations training undertaken by the graduands entailed rappelling from helicopters; tracking and navigation as well as first aid and searches in built-up areas, amongst many others.

Among the 20 dogs and handlers who graduated, 10 were trained in explosive detection and five in narcotics detection, while five dogs were trained for special operations; the first of its kind in Nigeria. The ceremony featured practical demonstration of the capabilities of the military working dogs and their handlers, which included explosive ordinance and narcotics detection, tracking and arrest of suspects in simulated built-up areas as well as rappelling of a dog and handler from a helicopter, which was executed by one of the female graduating dog handlers, Lance Corporal Naomi Danjuma.