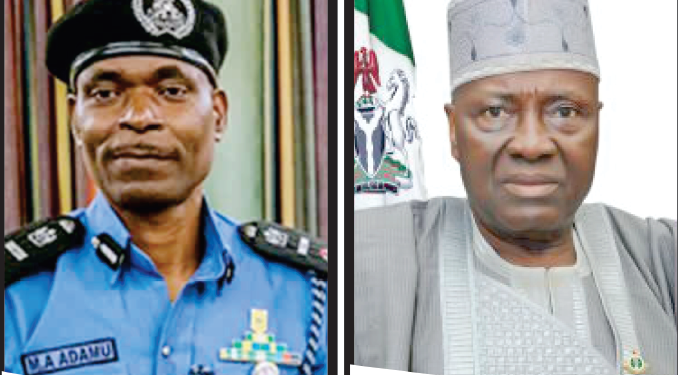 There are indications that all is not well between the Police Service Commission and the Nigeria Police Force.

The disagreement may not be unconnected with the recruitment of 10,000 Nigerians as constables into the Nigeria Police Force.

The Commission on Friday issued a statement signed by its spokesman, Ikechukwu Ani, to announce the suspension of the recruitment exercise which it started last year.

The statement reads: “The Police Service Commission has enjoined applicants for recruitment into the Constable cadre of the Nigeria Police Force to exercise some patience as it finalises the remaining stage of the recruitment exercise.

“The Commission also wishes to advise all the candidates who participated in the recruitment exercise up to the aptitude test to ignore any list or information on the exercise emanating from outside the Commission.

“It is the constitutional responsibility of the Commission to recruit Nigerians into the Police Force whether as Constables, Cadet Inspectors or Cadet ASPs, and the Commission is not ready to abdicate this very important mandate.

“The Commission will resist any attempt to ambush the ongoing recruitment exercise or dilute its content. It notes that such attempt will be an affront on the Constitution and a waste of national resources.

“Meanwhile the Commission wishes to put the ongoing exercise on hold in order to finalise the remaining stage of the exercise. Candidates are to wait for further directives from the Commission.”

A source close to the latest development explained to The Nation that the suspension was announced following indications that the Nigeria Police Force may tamper with the process and list submitted to it.

According to the source, the Nigeria Police Force decided to hijack the whole process of recruitment after the Chairman of the Commission, Alhaji Musiliu Smith refused to do the bidding of the police leadership.

Narrating the circumstances that led to the suspension, the source who is privy to the whole recruitment process said: “On Tuesday, the Inspector-General of Police came with his management team to the Police service commission but before then, he had written a letter to the commission saying that the recruitment is the responsibility of the Nigeria Police Force, quoting the Nigeria Police Act.

“He said that it is after recruitment that the PSC will be given the material or the list to place, which is the appointment. That, to the commission, appeared like a rubber stamp approach to things.

“They came and met with PSC, at the meeting, there were argument back and forth about what recruitment was and what appointment was.

“The IG also came with a letter written by the former Attorney General of the Federation, Mohammed Adoke, where he described recruitment as a screening while appointment was placing.

“The Commission told them there was an earlier legal opinion by Kanu Agabi where he described recruitment as a process of appointment.

“Ben Nwabueze also had similar opinion with Kanu Agabi.  The letter by Adoke that the IG quoted was written in 2010, and even when he wrote that, it was not and has not been in operation.

“The commission told the team that we are in 2019 and that what it was quoting was nine years ago letter.

“At the end of the day, the commission told the team that there was no time to argue the letter as Nigerians were eager to be employed to fill vacant positions in the Force.

“The recruitment started since 2018 with advert placement which was followed by short-listing those who showed interest, followed by screening and exams.

“Aptitude tests have just been concluded. It is now that the commission is about to start aptitude test that the Nigeria Police Force realised that it is their responsibility to recruit.”

He continued: “To me, it is an ambush. Rather than allow it to collapse, the Commission now suggested that we jointly do it together.

“To be honest, the whole process had seen the involvement of personnel from the Force Headquarters.

“CP in charge of recruitment from Force headquarters were posted alongside others to other states for the joint exercise.

“We told them that we should go ahead with this and then go for judicial interpretation after the completion of this process. The management team agreed and said henceforth, whatever we do must be done from the Force Headquarters and the commission agreed.

“A commissioner was confirmed by the National Assembly after he was screened just like the ministers and their tenure is five years. Despite all these, he still agreed to work with the DIG.

“Despite all these, a date between 28 and 29 August was fixed to meet at the Force Headquarters for them to jointly look at the list from exams conducted and also to check the work of the consultant and come up with a list of candidates who would be invited for medicals.

“The day came and the Director of police recruitment from the commission started calling the DIG designated as agreed but he did not pick his call all through the day.

“About four of them left for the force headquarters but there was no place arranged for the meeting and those they went there to meet could not be located. The DIG refused to pick his call. With that, it was obvious their visit to the commission was just to sell a dummy.”

Crux of the matter

He said further: “The truth is that when the result from the exam conducted was released by the consultant, we submitted the soft and hard copy to them. Now, the team is supposed to work together but since they have a copy, it appears they want to hijack it from us.

“We got information that they locked themselves up in a place and were inserting names of unqualified candidates and those who did not even take part in the screening process.

“The main crux of the disagreement is because the Police Force came up with lots of names of those that did not apply and asked that the chairman insert their names, but the chairman being a man of integrity refused to put those names because they did not undergo screening.

When The Nation contacted Ani to know why the exercise was suspended, he said: “The commission is interested in making a success of the recruitment of 10,000 Nigerians as constables into the Force.

“We will however resist any attempt to dilute merit in the process of the recruitment. The Commission and the Force had jointly handled the exercise.

“Even it is the exclusive responsibility of the commission but we felt we should carry the police along since we are recruiting for them.

“The commission will not in any circumstance abdicate the mandate given to it by the Nigerian constitution.”

Section 153 (m) of the 1999 Constitution empowers the PSC to recruit for the Nigeria Police Force.

It reads: “The commission is one of the federal executive bodies established under section 153(m) of the 1999 constitution of the Federal Republic of Nigeria, as amended. By virtue of paragraph 30, part I of the Third  Schedule to the constitution and clause 6(1) of the Police Service  Commission (establishment), Act 2001, the commission is charged with the responsibilities of appointment, promotion, dismissal, and disciplinary control of members of the Nigeria Police force (except the Inspector-General of Police).”

The constitution also says that the commission shall not be subject to the direction, control or supervision of any other authority or person in performance of its function other than as is prescribed in the Act.

Another source who didn’t want his name mentioned told The Nation that actions taken so far by the Commission shows that it wants peace and amicable resolution.

According to him, “We are interested in peace because a lot of manpower has gone into this process since we started last year.

“It will amount to waste of national resources if the Force jeopardizes this whole process. Also, the candidates whose hopes have risen might end up unemployed thereby increasing the unemployment rate in the country.”