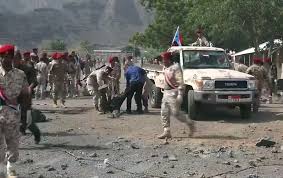 A missile attack on a military camp in Aden, the seat of Yemen’s internationally recognised government, has killed dozens of people, according to officials, while a separate suicide bombing in the southern city killed at least 10 others.

The Houthi movement, which controls the capital, Sanaa, claimed responsibility for yesterday’s attack, which targeted a military parade at a camp belonging to the Yemeni Security Belt forces backed by the United Arab Emirates, a key partner in a military alliance assembled by Saudi Arabia to fight against the rebels.

The Houthis’ official al-Masirah TV said the group launched a medium-range ballistic missile and armed drone at the al-Jalaa military camp, in Aden’s Buraiqa district. It described the parade as being staged in preparation for a military move against provinces held by the rebels.

Al-Masirah TV quoted Houthi spokesman, Yehia Sarea, as saying that the strike had caused scores of casualties, including military commanders.

The Reuters news agency quoted a medical and a security source as saying at least 32 people were killed in the attack. A health official told The Associated Press news agency the death toll stood at 40.

News agencies reported commander Muneer al-Yafee, a leading figure of the southern separatists also known by his nickname Aboul Yamama, was among those killed. He was reportedly giving a speech at the time of the attack.

The blast occurred “behind the stand where the ceremony was taking place”, a witness told Reuters. Photos showed red berets laying on the ground in pools of blood. There was no immediate comment from the Yemeni government or the coalition.

Al Jazeera’s Mohammed Alattab, reporting from Sanaa, said the Houthis sought to send a message to the UAE and Saudi Arabia that the rebels “would hit them hard” in case they continue with their military operations in the country.

Lawmaker Urges Muslims To Imbibe Teachings Of The Holy Prophet