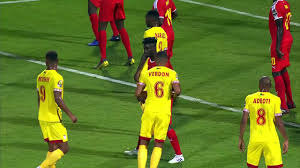 Benin stunned Africa Cup of Nations title contenders Morocco on penalties to reach the quarterfinals for the first time after a 1-1 draw in Cairo, yesterday.

The victory saw the Squirrels advance to the quarterfinals for the first time, while the Atlas Lions bowed out of the tournament.

The Atlas Lions pressed the Squirrels from the start with and they nearly grabbed an early goal through Youssef En-Nesyri.

Benin grew into the match and they had a chance to break the deadlock seven minutes before the half-hour mark.

However, Morocco keeper Youssouf Bounou was well-positioned to deny Benin midfielder Mickael Pote, who has netted twice in the tournament.

The Atlas Lions then took control of the match, but Allagbe was having a good match as he made a good save to deny Hakim Ziyech.

Benin then stood firm at the back and the score was 0-0 t the interval.

The Squirrels continued to frustrate the Atlas Lions after the restart and they took a surprise lead through Moise Adilehou.

The Greece-based defender scored with a right-footed shot which beat Bounou to make it 1-0 to Benin eight minutes after the restart.

Morocco head coach Herve Renard reacted by introducing Soufal Boufal, who is on the books of English side Southampton FC.

The Atlas Lions piled pressure on the Benin defence and they managed to grab a late equalising goal following a mistake by Jordan Adeoti. Jamilu Collins

Senegal secured a narrow 1-0 victory over Uganda in the 2019 Africa Cup of Nations (Afcon) Round of 16 match at the Cairo International Stadium in Egypt on Friday.

The victory saw the Lions of Teranga progress to the quarterfinals where they will face Benin on Wednesday, while the Cranes bowed out of the competition.

The Cranes contained the Lions of Teranga in the opening exchanges, but they conceded fouls that saw Denis Onyango and Emmanuel Okwi being booked very early.

Senegal piled pressure on the Uganda defence and Aliou Cisse’s men managed to break the deadlock 15 minutes into the encounter.

Mbaye Niang’s low pass sent Sadio Mane through on goal and the Liverpool FC forward fired past on-rushing goalkeeper Onyango to make it 1-0 to Senegal.

Uganda tried to respond with a goal when Okwi unleashed a thunderous shot which was parried away by Senegal shot-stopper Alfred Gomis in the 23rd minute.