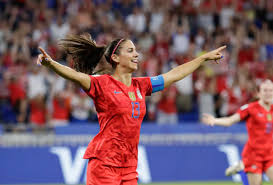 The United States survived a stiff test from England to win 2-1 and advance to the Women’s World Cup final in Lyon, yesterday.

The pregame news was dominated by changes from both managers, as Megan Rapinoe was not in the U.S. lineup and England coach Phil Neville was forced to start Carly Telford after goalkeeper Karen Bardsley was ruled out with a reported hamstring injury.

Rapinoe, who scored both goals for the U.S. in the quarterfinal win against France, was replaced by Christen Press and the move paid dividends in the 10th minute when she smashed a header past Telford from a Kelley O’Hara cross to make it 1-0.

The goal was the first England had conceded in 380 minutes, but the Lionesses got right back in the game when Ellen White expertly redirected a Beth Mead cross that beat Alyssa Naeher to even the score.

Alex Morgan, celebrating her 30th birthday, put the U.S. back in the lead just after the 30-minute mark with a perfect header from a Lindsey Horan ball into the penalty area and Naeher made a miraculous save from Keira Walsh’s long-range shot right after the goal to keep the score at 2-1.

The U.S. looked lively to start the second half, but failed to find an insurance goal and was handed a bit of bad news in the 65th minute when Rose Lavelle came off with an apparent hamstring injury and was replaced by Sam Mewis.

Minutes later, England looked to have evened the score at 2-2 as White beat Naeher after being played in to the penalty area, but the goal was ruled out due to a narrow offside call following a video review.

VAR came into play again in the 81st minute. This time the referee consulted the pitchside monitor and awarded England a penalty for a Becky Sauerbrunn foul on White, but Naeher came up big again and saved Stephanie Houghton’s spot kick to preserve the Americans’ lead.

England then went down to 10 players when Millie Bright was shown her second yellow card for a hard foul on Morgan and the U.S. held on to see out the result.

The Americans now await the winner of the other semifinal on Wednesday between Netherlands and Sweden to determine who they will play in the final on July 7 in Lyon.

Mikel To Miss Rest Of Eagles’ Campaign At AFCON