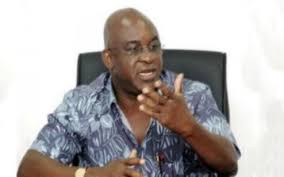 Former Senate President, David Mark has slammed the Super Eagles of Nigeria for their poor performances at the ongoing Africa Cup of Nations (AFCON) in Egypt.

The three time African champions finished their Group B campaign in second position behind newcomer Madagascar who defeated the Gernot Rohr-led side 0-2 on Sunday.

According to Mark , ‘ the national senior men team needs to show class in their style of play.’

“I want Super Eagles to win the Nations Cup but I don’t think they have played optimally so far that’s my own feeling. But they can do better because our victories have not been convincing enough.

“We are nearly 200m Nigerians and we can get 11 players that can show ‘don’t play with us’ our games should be beyond three points. When Nigerian players are in the field and the whole world watching must know how classy we are.”

He further charged the technical crew to change their tactics if they want to emerge as the African champions for the fourth time.

“First of all, our coaches must change tactics; our passes are long and inaccurate which drops by 5 percent. We give away the ball so easily.

“Look at the Brazilians when they play. If you play well and you lose, we will understand. But if you don’t play well, people will say go and watch them,” he concluded.