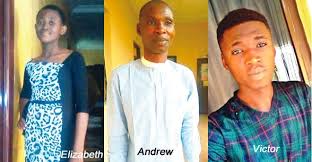 Amidst rumours of trying to divert justice on the case of the late rape victim, Ochanya Ogbanje, persons handling the matter have rebutted allegations by some good Nigerians that the hope for justice may have been compromised following its transfer from Makurdi to Otukpo without prior knowledge of the family.

Recall that young Ochanya died on October 17, 2018 due to complications from alleged sexual molestation suffered in the hands of a senior lecturer at the Department of Catering and Hotel Management of the Benue State Polytechnic, Ugbokolo and his son, Victor Ogbuja, who is now at large.

The case had generated a public outcry even both local and internationally.

It is pertinent to note that on February 5, 2019, the case came up, the Benue State government had urged a Makurdi Chief Magistrate’s Court to decline a bail application sought by the accused lecturer on grounds that the offence was not bail able.

During the proceedings, the prosecuting Lawyer, Mrs. Addingi, told the trial Magistrate, Mr. Isaac Ajim, that the prosecution was vehemently against the bail application.

Addingi who represented the State’s Attorney General and Commissioner for Justice, predicated her objection on the ground that the offences were not bailable as they carry capital punishment upon conviction.

The accused did not secure bail at the end of the day and is still in prison custody. It would be recalled that on February 7, 2019, two days after proceedings at the Magistrate Court in Makurdi, the Coalition of Civil Society for Human Rights and Anti-Corruption in collaboration with the Network of Pro-bono Lawyers, alleged that it uncovered plans by top politicians in the state to set Ogbuja free.

In a press statement in Makurdi, the Executive Director of the coalition, Comrade Isaac Ikpa, alleged that the plot by the politicians was meant to mount pressure for the bail of the accused.

In a statement, FIDA’s Prisca Ula told pressmen in Makurdi that the case had not in any way been compromised as insinuated on social media. Ula said the transfer had to do purely with jurisdiction as it was earlier being treated at a High Court in Otukpo before it was brought to Makurdi for the purpose of investigation.

Stressing, “I don’t think the case can be diluted. All witnesses in the matter are in Otukpo or Ochanya’s village. So it would be cheaper for them to attend court proceedings. FIDA did its best in making sure that the prosecution filed the matter,” she said.

Confirming that the body was aware that the case was transferred to Otukpo but could not commence because the sitting judge had been away on election tribunal duties, dismissing rumours that the case came up twice for hearing without the knowledge of the family.

The Solicitor General of the State’s Ministry of Justice, Lady Christy Anagende, said the case was being prosecuted no matter the location and would get the desired justice.

However said that though she was yet to be at home with the reasons why the case was transferred, but disagreed with the insinuations on social media on attempt to rob the dead , family and society of true justice.

Meanwhile, the deceased’s family, has through John Ameh, has appealed for speedy justice