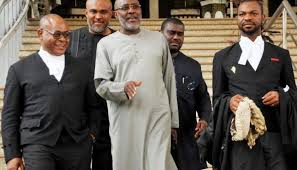 Standing trial, Olisa Metuh, former National Publicity Secretary of the Peoples Democratic Party (PDP),  has told the Federal High Court sitting in Abuja that the sum of N400m in which he is standing trial was paid to him by former President Goodluck Jonathan and not the former National Security Adviser, Col. Sambo Dasuki (retd).

In his defence before Justice Okon Abang of the Abuja division of the court, Metuh stated that the money was paid to him by Jonathan to carry out some national assignment for the Federal Government.

The former PDP spokesperson, who is standing trial alongside his company, Dextra Investment Ltd, on account of the money told the court that he could not consider the money for act of any unlawful purpose because it came from the then president.

Metuh recalled that he held a meeting with the then president where various issues and challenges facing the country were discussed; adding that former president Jonathan promised and made the N400m available to him to carry out the national assignment.

He stressed that the money could not have been for an unlawful purpose because he was helping and contributing to stabilising the then government because President Jonathan was elected on the PDP platform.

Metuh specifically dismissed allegations that the money was channeled to him through Dasuki. “I did not receive any money from Col. Sambo Dasuki. Dasuki represents one of the finest and most brilliant military officers ever produced in the Nigerian military. He has had a distinguished career, served a lot of government and finally served as National Security Adviser for this country, under former president Jonathan.

“Up till May 29, 2015, no individual or group had ever questioned Dasiki’s integrity, not to talk of being charged or arrested for any unlawful act. I am not aware of any criminal charge against Dasuki or any unlawful act until we lost government in 2015.

“As I am talking on oath before this court now, I can say categorically that Dasuki has not been interrogated, charged or convicted for any act relating to me and my company.

“The N400m was paid into my account by the then president and I did not conceal or disguise the money and it was not transferred out of jurisdiction”, he said.

Metuh insisted that the money was paid to him for specific purposes and disbursed to those who executed the purposes as directed by the then president, adding that he later submitted details of the disbursement to the president. The Sun

Related Topics:#DasukigateArmsgateOlisa Metuh
Up Next