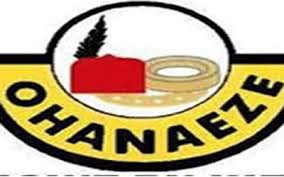 The Coalition of North-Central Youth in Politics (CNYP), after an extra ordinary emergency meeting held at Abuja, Federal Capital Territory (FCT) over the weekend has says, ‘request by the Ohanaze Ndigbo  for the office of Secretary to the Government of the Federation was an assault on the people of North-Central Zone.

Stressing that it is not news that Atiku Abubakar, the presidential candidate of the People’s Democratic Party (PDP) in this year’s presidential election was not just endorsed by this group of Igbo’s but posted a stellar performance in the south eastern states, recording 85 per cent votes in Enugu, Ebonyi, Abia and Anambra States.

This clearly shows that the Ibo rejected the progressives’ path, thereby pitching tent with the old order.

Speaking to Journalists, Alhassan Mohammed-Niger (Convener) , and  Hon. Aliyu Musa-Nassarawa (Secretary, Communique Drafting) , says ‘It is therefore, laughable and an affront on our people that Ohaneze now want to harvest where they did not sow.  Further asked, where were these Ohanaze when the people of the North-Central were working for the retention of President Muhammadu Buhari? Are Ohanaze playing the role of the Baboon in the popular Nigeria adage of Monkey de work Baboon de chop?, They frowned.

Stating that in the election that returned President Buhari as winner, North West produced the highest number of votes. The region is followed by North East. Today, the northeastern region has been compensated with the office of President of Senate and the Southwest which came 4th in Votes for the Apc have also been compensated with the office of the Speaker in addition to the position of the Vice President, while the North-Central zone which came 3rd in votes for the party is patiently waiting for the Office of the Secretary to the Federation.

“The North-Central refused against all odds of blackmails by the PDP and retrogressive forces to take over the zone using Fulani/Myetti Allah occupation and farmers/herders crisis especially in Benue, pleatue, Niger and Nasarawa States by working assiduously for the victory of President Muhammadu Bahari and the APC in general.

“We therefore, call on President Muhammadu  Buhari to disregard the request of any group in the name of Ohanaze or from Southeast and do the needful by appointing Senator George Akume from North-Central  as Secretary to the Government of the Federation.

“It’s our position, that Senator Akume among all from North-Central zone haven’t worked, believed in the capacity, principles and value of President Muhammadu Buhari and importantly poses the requisite as a season administrator be considered for the position of Secretary to the Government of the Federation. The situation where others would work while others would fold their arms only to show up during harvest is unacceptable.

“Ohanaze can’t reap from where they have not sown, they ought to have believed in the person of President Muhammadu Buhari and worked for it.

The group thanked Nigerians for believing on the dreams of Next-Level, President Muhammadu Buhari.