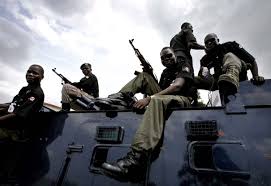 The Warri Area Commander, ACP Mohammed Garba led a team of police officers in the well-coordinated operation that lasted for over an hour.

However, it was gathered that no suspects were apprehended.

Revealed that the products were loaded in drums, jerricans and sacks while some were inside a wooden boat awaiting to be offloaded and were all destroyed.

Addressing newsmen shortly after the exercise, Garba said the action was a sound warning to perpetrators.

Garba who was deployed to Warri about three weeks ago, said he acted, based on tip off that some elements were sabotaging the federal government through illegal bunkering in the area.

“I received information from above that I should come and see the place. The information was true that some people are sabotaging federal government by doing illegal bunkering.

” This is a sound warning to then, I am here to work for the federal government and I will not comprise illegal bunkering.

“I will make it uncomfortable for them, they must desist from the illicit business,” he said.

Garba who described himself as a “seasoned and sound operational police officer” warned his officers against compromising, noting that anyone caught would face the full weight of the law.

“The police will take action against any officer that compromised. They should work as police officers. Of course, I do not think a sensible police officer will be a party to illegal bunkering.

“It is drizzling and I am here to perform my duty as a police officer. It is going to be a continuous exercise,” he said.

He said he would write an invitation letter to leaders of  Mason community after seeking permission from above to come and explain why they should habour illegal bunkering in their domain.

The police team had earlier moved to Ubeji community in Warri South where an empty large wooden boat popularly called Cotonou boat was discovered under the bridge.

”The boat was confiscated and the suspects and products are in our custody.

“They will be handed over to the anti-graft agency as soon as investigation is concluded,” the officer said while explaining to Garba.

Suicide: FG To Establish Centre To Address Prevalence In Nigeria