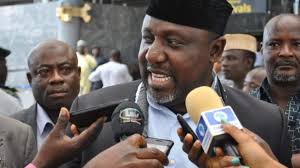 Immediate past governor of Imo state and controversial senate-elect, Rochas Okorocha, has been stopped from participating in the inauguration of the 9th National Assembly.

It was reported that after some minutes at Omolori’s office, he walked out of the National Assembly without being accredited.

This may not be unconnected to issues surrounding his certificate of return.

Meanwhile, Senator-elect representing Borno State, Ali Ndume and Ahmed Lawan have been nominated to be the next Senate President.

Ndume was nominated by Senator-elect from Adamawa North, Ishaku Abo on the floor of the Senate during Tuesday plenary. (Daily Post)