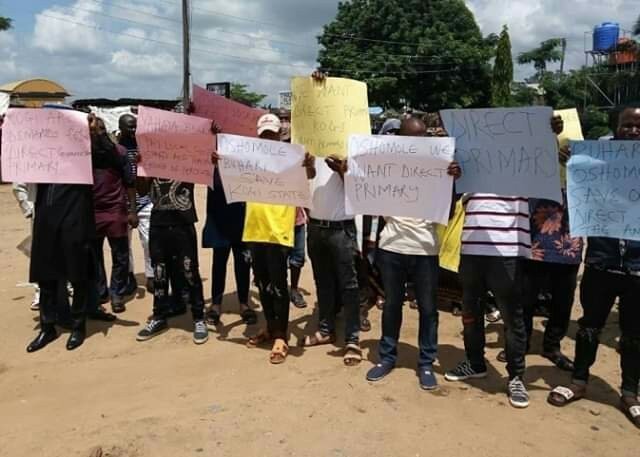 An All Progressive Congress (APC) group, Save Our Souls, has called on the National Working Committee of the party to conduct direct primary during the August governorship primary in Kogi State.

The group, which staged a demonstration along major streets in Lokoja, the state capital, on Monday said it will be suicidal for the party to give the return ticket to governor Yahaya Bello as they claime he has performed badly in office.

The group said Governor Bello has failed to provide quality leadership that would earn him continuity in the November governorship election, stressing that the best way to test the popularity of a governor is to allow the party to conduct direct primaries for his re election.

The group, which described itself as concerned APC stakeholders, stormed the premises of the state council of the Nigerian Union of Journalist (NUJ) along Lugard road in Lokoja, decrying what they observed as the failure of Yahaya Bello administration in the last three and half years.

Spokesman of the group Abubakar Tanko said that the aim of the protest was to draw the attention of the National Secretariat of APC to the plight of the people of Kogi.

In his words, “We in Kogi have been reduced to street beggars, our children are out of schools, we can no longer pay school fees due to non payment of salaries; you cannot point to any project either completed or ongoing in the entire state.

“We are calling on President Buhari, who we know to be man of integrity and Adams Oshiomole, to allow direct primary so that we can choose a credible candidate. It is only through direct primary we can freely choose candidate of our choice,” the protest spokesman said.

“We embark on this peaceful protest because we believe in the integrity and sincerity of Mr President to deliver us from this shackle of oppression to which Bello’s administration has subjected us.”

Tanko said that it will be out of place to entrust Bello with another four years of office considering the condition of Kogi citizens under his leadership, saying the governor has failed people.

DSP Race: Kalu Reveals Why He Stepped Down