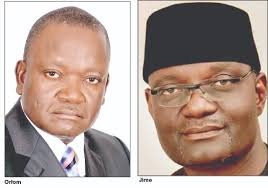 The Governorship Election Petition Tribunal sitting in Makurdi, the Benue State capital has adjourned for 24th June 2019 for trial of the case between the All Progressives Congress (APC) governorship candidate in the just concluded 2019 elections, Barr. Emmanuel Jime and his Peoples Democratic Party (PDP) counterpart, Governor Samuel Ortom.

Emmanuel Jime is challenging the return of Governor Samuel Ortom of Peoples Democratic Party (PFP) as Governor of Benue State at the tribunal.

Justice Adebola Olusiyi, chairman of the panel who issued the order at the end of prehearing said the “course is now clear and the stage is set for full trial.”

According to Justice Olusiyi, there shall be strict compliance with the number of days parties are entitled to.”

He noted that there is only one pending Motion on Notice which will be taken outside prehearing.

Ortom’s lead counsel Sabastian Hon SAN, who responded on behalf of the Bar assured the panel of their cooperation towards ensuring that trial is conducted in line with the law.

He thanked their Lordships for the conduct of proceedings thus far.

Earlier, while ruling on application by INEC for an order striking out certain paragraphs of Jime’s reply, Justice Olusiyi held that the panel cannot depart from its earlier position, to defer ruling until the substantive petition is heard.

The chairman further held that there is no compulsion on the Tribunal to deliver ruling on applications before hearing the substantive petition.

He accordingly differs ruling on the application pending hearing of the substantive petition.

Similarly, Ortom’s application which was struck out last week and refiled was argued and deferred for ruling at the conclusion of hearing.

The fresh motion, which is dated 31st May, 2019 was filed on 1st June, 2019, is predicated on five grounds and supported by an eight-paragraph affidavit.

Hon argued that in replying to the second respondent’s reply to the petition, the petitioner offends the law by introducing new pleadings.

According to Hon, introducing new issues by the petitioner amounts to gross abuse of court process.

In his reply on points of law, Hon submitted that no paragraph of his reply contains prayers, objections or conclusions as posited by the learned counsel to Jime Kehinde Kolawole Eleja SAN.

He submitted that his deposition contains raw facts which fit into the requirement of Section 285(5) of the Evidence Act.

Hon, who insisted that the witness statement and certain paragraphs of Jime’s reply to second respondent’s reply to the petition offends the law urged the Tribunal to strike them out.

Both PDP and INEC did not oppose the application.

However, counsel appearing for Jime, Kehinde Eleja (SAN) opposed the application by filing a counter-affidavit, supported by a written address on 4th June, 2019, in praying the Honourable Tribunal to strike out paragraph 2(a-b) of the affidavit in support of Ortom’s motion.

He also prayed the Honourable Tribunal to strike out paragraph 4(I) and Paragraph 5 and 10 of the affidavit in support.

His contended that the said paragraphs are in contravention of Section 115(2) of the Evidence Act.

Eleja argued that Section 115(2) clearly spelt out what an affidavit should contain, that is to say: It should not contain prayers, conclusions and objections.

He contended that Ortom took up the job of the panel when he went on to draw conclusions based on his findings. It was his contention that Jime’s response to the second respondent’s reply to the petition was properly filed and urged the Tribunal to dismiss Ortom’s application.

Speaking with journalists after the sitting, Oba Maduabuchi SAN, who appeared for the PDP said he has appealed the earlier ruling of the panel on his application to strike out certain paragraphs of Jime’s reply.

He said by the Tribunal’s ruling, he has been shut out from replying Jime.

Ortom’s lawyer, Hon also said he will appeal the ruling.

However, Kehinde Eleja told journalists that the decision to reserve ruling on the application is to prevent the situation whereby vital issues will be left out.

While admitting that he is aware of an appeal filed by the PDP, Eleja said he does not foresee an order of stay of proceedings.

According to Jime’s lead counsel, it is far from the truth that his client is bringing witnesses through the back door.

He explained that the paragraphs and witness statements which INEC, Ortom and PDP are praying the Tribunal to strike out are issues that arise following an order of the Tribunal allowing Jime to inspect election materials.

According to him, “the witnesses we are going to call are in line with that.” (The Nation)

Certificate of return: Okorocha says He Has forgiven Ibeabuchi