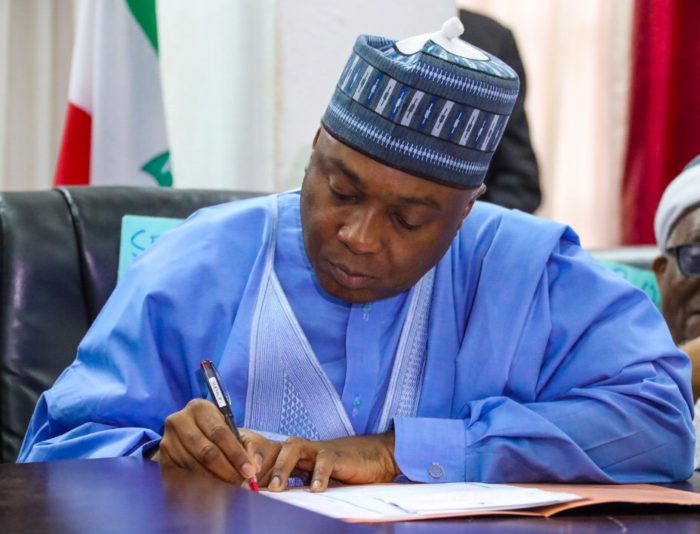 Immediate past Senate President, Dr. Abubakar Bukola Saraki, has donated his Severance Allowance  to families of three victims of the insurgency in the North-East zone being perpetrated by Boko Haram and children of late Senators in need of financial assistance.

The directive was contained in a statement signed by his Special Adviser (Media and Publicity), Yusuph Olaniyonu, that the Severance Allowance should be used to support the families of Leah Sharibu, who is being held by Boko Haram after she and other girls were abducted from Dapchi town in Yobe State, and two humanitarian workers abducted and subsequently murdered by the insurgents, Hussaini Ahmed Khoisan and Hauwa Liman.

Also to benefit from the money are children of late members of the Eight Senate who may require financial assistance in furtherance of their education as a Trust Fund is to be established by the management of the National Assembly for the purpose.

He stated that his decision to use the severance package to support the selected victims of the insurgency was based on the fact that their cases represented some of the most touching humanitarian issues debated at the plenary during the four-years of the Eighth Senate and on which his colleagues and himself made emotional and passionate speeches.

Another 20 percent is to be donated to the family of the second aid worker, Hussaini Ahmed Khoisan, also murdered in the same circumstance by Boko Haram.

The remaining 40 percent should be used by the National Assembly Management to set up a TRUST FUND that will assist children of deceased members of the Eighth Senate who are in financial need for their education.

On his Twitter page, Saraki tweeted: “It is my hope that this TRUST FUND should grow with more contributions from my dear colleagues, present, past and future, who may be moved to put in additional money into it.

“The Clerk of the National Assembly will immediately get an official letter from me mandating him to act as stated above on the disbursement of my Severance Allowance”, Saraki added.