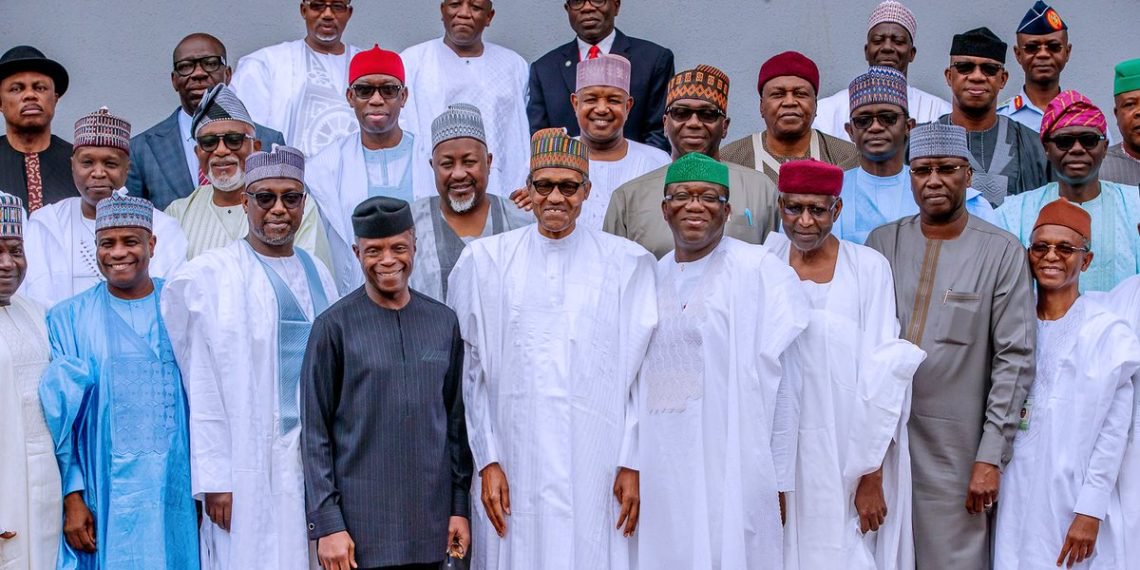 Following the tensed security situation in the country, President Muhammadu Buhari met behind closed doors with state governors and security chiefs at the Presidential Villa, Abuja on Friday.

The meeting took place just as governors of the Southwest states served notice of a summit intended to address the threat.

Governors elected on the platform of the Peoples Democratic Party (PDP) had only a few hours earlier met at the Bayelsa Governor’s Lodge, Maitama, Abuja to discuss the worrisome situation and demand immediate establishment of state police.

The meeting at the Presidential Villa, which began at 11.01 am when President Buhari the Council Chamber, was attended by current and immediate past state governors across the political parties.

Briefing newsmen in company with the governors of Ebonyi, Kebbi, Delta, Ondo, Plateau and Borno states after the meeting, Governor Fayemi, the chairman of Nigeria Governors’ Forum (NGF), said the meeting with the President was at the instance of the governors of the 36 states collectively.

He said: “It has to do with the security situation in the country; our concerns about what is going on all across the nation.

“We had a very fruitful meeting with Mr. President.

“Of course, he was not oblivious of the challenges. He gets security reports on a daily basis. He understands what the issues are.

“But we felt as chief security officers in our respective states, it is also important for us to at least keep Mr. President abreast of the enormity or the challenges we are facing and also highlight the concerns of our citizens across the board about rural banditry, farmers/herders clashes, kidnapping, militancy in the (Niger) Delta, insurgency and cultism.

“So we discussed extensively all of these issues and looked at the various ways that we felt as governors we could assist Mr. President as the Commander-in-Chief to curb these issues.

“Of course, we were able to, in the first instance, look at the nexus between our economic challenges and the security challenges as well, and the importance of tackling the causes of crime, not just crime on its own.

“We also looked at the criminal justice system that appears to give some room for impunity.

“When people commit crimes and they are not punished effectively in accordance with the statutes, it creates an opportunity for replicating such crimes.

“Of course, Mr. President was also equally concerned about that.

“He made it clear to us that we all knew that he campaigned on the basis of security, economy and accountability, and these things are still the most germane issues on his agenda.”

Reiterating the readiness of governors to join forces with President Buhari to end the security challenges in the country, Fayemi said that a comprehensive National Economic Council (NEC) meeting will be held to address the issue of security.

He said, however, that the governors were divided with regard to their preparedness for state police.

He said that while some governors had expressed their readiness for state and local government police, others were still battling with the challenge of paying the salaries of existing workers.

He said: “On whether state governors should be involved in state policing, the position of NGF is that we have not taken a position, because experiences vary.

“There are governors and states where their experience do not necessarily lend itself to more evolved policing to the states.

“There are also states where there are agitations for it. There are governors who have the views that that will work better in such states. And, of course, there are the economic issues relating to that.

“So, we have the capacity at the state level to fund state policing. Those are issues that will come to play when we get to the National Economic Council meeting that has been called.

“Particularly because there is a committee that is looking into it after the submission of the report on SARS. So, we will take all of these together.” he said

Asked when the NEC meeting will take place, he said “I am going to the Vice President office to finalize the timing for the meeting.”

According to him, the President expressed his concerns as they thanked him for what has been done so far.

“And in a range of our states, we have received multiple support, be it bailout funds to address salaries challenges. If that has not been dealt with, the situation would probably have been worse.

“Support in terms of national food security committee, support on flooding, support in the Northeast for insurgency and related activities.

“But these problems are proliferating and we need to nip them in the bud as field commanders of Mr. President, if you like, in our various states.”

On the $1 billion earlier taken from the excess crude account, Fayemi said it must have been spent on securing the nation by the security agencies.

But he said he didn’t have the details.

“I am not giving you specific details of how that money was expended. We will be happy to do that, but we feel that that is really not a matter for us as governors.

“Yes, we were supportive of it because our position has always been whatever is required by the Commander-in-Chief to resolve security challenges in Nigeria, we will line up behind him and support him.

“Of course yes, we demand accountability. We will like to assure you that the $1 billion taken was definitely expanded among the various security services, but the details I cannot give you on top of my head because I wasn’t expecting you to ask that question.”

The Chairman of Southwest Governors Forum, Governor Rotimi Akeredolu of Ondo State, said yesterday that the Southwest governors had decided to hold a regional summit to address the growing spate of insecurity in the region,

“There is an urgent need to stem the growth of criminal activities and banditry in our region and as leaders. We must be proactive in our approach to addressing the issue,” he said at the end of a meeting in Abuja.

He said the Development Agenda for Western Nigeria (DAWN) Commission had been directed to coordinate the summit, which he said will be attended by critical stakeholders.

The summit, he added, would also help in further promoting the developmental agenda of the South West.

Akeredolu said the consulting firm, KPMG, had been appointed to review the tenure of the Group Managing Director of Oodua Investment Company, which has all the Southwest state governments as shareholders.

Governors elected on the platform of Peoples Democratic Party (PDP) yesterday demanded immediate establishment of state police as an effective response to the worsening insecurity in the country.

The governors in a communique read by the Chairman òf the Forum and Governor òf Bayelsa State, Hon. Henry Seriake Dickson, expressed worries over the spate of killings across the country and called for effective measures to arrest the trend.

A statement issued by the Special Adviser Media Relation to the Governor òf Bayelsa State, Mr. Fidelis Soriwei, stated that Governor Dickson made the call on behalf of the Forum while reading the communique of its late night meeting at the Bayelsa Governor’s Lodge, Maitama, Abuja on Thursday.

He said that the governors would raise the issue of security among others with the President in a meeting scheduled for yesterday.

The statement quoted Governor Dickson as saying: “We express deep concern over the politicization òf the security apparatus in every state by the Federal Government and its agencies and by operatives of the other party in the various states they are not in control of, and as such support the growing calls for the establishment of state police as a response to the security situation in the country.

“And we believe that this is one of the reasons we have this widespread insecurity and will take some of these issues up when we interact with the President.”

The PDP governors also condemned the recent closure of DAAR Communications Limited, owners of AIT and RayPower, by the Nigerian Broadcasting Commission.

The governors described the suspension of the licence òf AIT and Raypower FM as an act of repression against the media, which they insisted was a threat to the growth of democracy.

The governors enjoined the Federal Government and its agencies to ensure application of due process to deal with allegations, if any, rather than the recourse to authoritarianism.

“This evening as we are here, we understand DAAR Communications has been closed down, and our position is that due process must be followed. If there are any allegations of infractions, then due process of the law must take place.

“When you shut down news outlets, when you harass and intimidate journalists, then you are threatening the growth of democracy.

“We condemn it and call on the Federal Government to do what is right,” the statement quoted the governors as saying.

Denying the allegation of diversion of local government funds, the PDP governors challenged the Federal Government to name the states involved in the reprehensible act and the time the time it was committed.

They also condemned the alleged diversion of local government funds, saying that rather than doing so, they had always ensured subsidising the funding of the councils in the state.

“We dealt with the alleged diversion of local government funds by state governments and we condemned it in very strong terms.

“We as governors of the PDP want to make it clear that no PDP Governor is involved in this allegation of local government funds diversion.

“In our case, the reverse is the case. It is the state governments that are supporting, subsidising the funding of local governments.

“So we call on the Federal Government and the agencies that are making this allegations to name the state government and possibly tell us the people involved in this alleged diversion.”

The governors said they were eager to pay the new minimum wage to alleviate the suffering of the Nigerian worker, even as they called on the President to forward a bill to the National Assembly to ensure a review of the revenue allocation formula in the country.

AIT Back On Air As Court Nullifies NBC’s Suspension